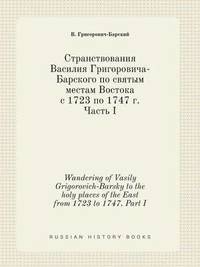 Wandering of Vasily Grigorovich-Barsky to the Holy Places of the East from 1723 to 1747. Part I

av V Grigorovich-Barskij
Häftad Ryska, 2015-04-12
789
Köp
Spara som favorit
Skickas inom 10-15 vardagar.
Fri frakt inom Sverige för privatpersoner.
Vasily Kiev (Grigorovich-Barsky) - Russian pilgrim-peshehodets (1701 - 47). In 1723 he went to Lviv, where he managed to enter the Jesuit Academy under a false name Barsky (1724): but the Jesuits soon figured out that they were dealing with the Orthodox, and threw him out of the academy. In August 1724 Basil, along with a widowed priest, has taken on foot walking in Rome; Then he went to one of Corfu, Kefalonia, Zante Chios, Thessaloniki and Mount Athos, and from there to Palestine, Syria, Arabia to Mount Sinai, Egypt, again visited the islands of the Archipelago and stopped at some time in Constantinople, he went to Antioch and back to Mount Athos, passed Epirus, Macedonia and Constantinople through Romania, Bulgaria, Moldova and Poland, returned to Kiev, where he soon died. During all their wanderings led Basil extensive travel notes. His descriptions of different detail and accuracy and demonstrate, among other things, that he diligently read and studied ancient, medieval Greek writers in particular, which often refers. Everywhere he shot types and plans of remarkable sites and buildings and gathered them around 150. On his return he would reconsider and correct their notes to the press, but the disease did not give him the opportunity to do it. Genuine Basil the manuscript was published in the whole integrity of the publication of the Orthodox Palestine Society, edited by NP Barsukov (SPb., 1885 - 89).
Visa hela texten