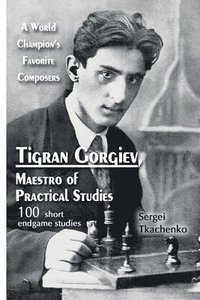 av Sergei Tkachenko
Häftad Engelska, 2018-11-01
149
Köp
Spara som favorit
Skickas inom 10-15 vardagar.
Fri frakt inom Sverige över 159 kr för privatpersoner.
Tigran Gorgiev (1910-1976) was one of the Soviet Union?s best endgame study composers. In his lifetime he produced around 400 studies and wrote three books and 101 articles with chess compositions. The vast majority of his endgame studies are of a practical nature, meaning that the positions presented could have arisen in over-the-board play. This makes them particularly useful to study for practical players as well as study fans.

Sergei Tkachenko, a member of the Ukrainian team that won the 5th World Chess Composition Tournament in 1997 and which came second in 2000, 2004, 2013, and 2017, has selected his 100 favorite Tigran Gorgiev studies, revising some of them and providing explanations suitable for less experienced solvers. There are no more than six moves in most solutions, so experienced chess players can analyze the positions directly from the diagrams.
Visa hela texten

Sergei is an award-winning author who has written 18 chess books (in Russian), including compositions and on historical themes. He is deputy chief editor of a Ukrainian chess composition magazine called Problemist of Ukraine and has a regular studies column on the ChessPro website. Sergei is a member of the Ukrainian Union of Journalists. He is a historian and archivist, as well as being a mechanical engineering graduate.