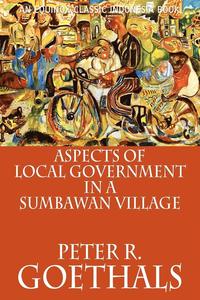 Aspects of Local Government in a Sumbawan Village

av Peter R Goethals
Häftad Engelska, 2009-09-01
349
Köp
Spara som favorit
Skickas inom 10-15 vardagar.
Fri frakt inom Sverige för privatpersoner.
Post-colonial social and political change at the village level has been a major continuing interest of the Cornell Modern Indonesia Project. In the village studies it has sponsored particular attention has been given to the lodgement of power, political organization, and the processes by which decisions are made.

Relatively brief surveys of two to three months by Indonesian graduate students during 1955-1956 in twenty-three villages on Java and fourteen on Sumatra helped set the stage for subsequent studies in depth by four social anthropologists. These studies have been undertaken in Central Java, in West Java (one near Bogor and one near Sumedang) and Sumbawa, respectively by Dr. Koentjaraningrat, Dr. Gerald Williams, Andrea Wilcox Palmer, and Dr. Peter Goethals.

The data collected and analysed in these studies should be of interest to the political scientist and sociologist interested in Indonesia as well as to the anthropologist. In view of the substantial areas of common concern in the research of these four anthropologists, it is our hope that their data will permit some meaningful comparison and that the significance of some of their findings may have a relevance transcending the Indonesian scene and prove useful to social scientists working in other areas.

In any case there should be no doubt as to the intrinsic value of
Dr. Goethals' study and of its significance to social scientists of whatever discipline who are concerned with contemporary Indonesia. Based upon two years of intensive research in western Sumbawa, his is the first of the village studies in depth to appear in the Cornell Modern Indonesia Project's Monograph Series. - George McT. Kahin, August 2, 1961
Visa hela texten

Bloggat om Aspects of Local Government in a Sumbawan...