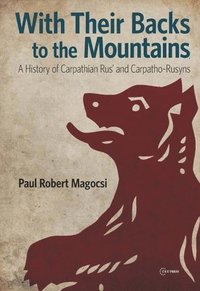 With Their Backs to the Mountains

A History of Carpathian Rus' and Carpatho-Rusyns

av Paul Robert Magocsi
Häftad Engelska, 2015-11-01
359
Köp
Spara som favorit
Skickas inom 5-8 vardagar.
Fri frakt inom Sverige för privatpersoner.
This is a history of a stateless people, the Carpatho-Rusyns, and their historic homeland, Carpathian Rus', located in the heart of central Europe. A little over 100,000 Carpatho-Rusyns are registered in official censuses but their population is estimated at around 1,000,000, the greater part in Ukraine and Slovakia. The majority of the diaspora-nearly 600,000-lives in the US. At the present, when it is fashionable to speak of nationalities as "imagined communities" created by intellectuals or elites who may live in the historic homeland, Carpatho-Rusyns provide an ideal example of a people made-or some would say still being made-before our very eyes. The book traces the evolution of Carpathian Rus' from earliest prehistoric times to the present, and the complex manner in which a distinct Carpatho-Rusyn people, since the mid-nineteenth century, came into being, disappeared, and then re-appeared in the wake of the revolutions of 1989 and the collapse of communist rule in central and eastern Europe. To help guide the reader further there are 34 detailed maps plus an annotated discussion of relevant books, chapters, and journal articles.
Visa hela texten

Paul Robert Magocsi is Professor of History and Political Science, Chair of Ukrainian Studies at the University of Toronto

List of Maps List of Tables Introduction Chapter 1. Carpatho-Rusyns and the land of Carpathian Rus' Human geography No shortage of names Physical geography A borderland of borders 2. Carpathian Rus' in prehistoric times Earliest human settlements The Iron Age and the Celts Early peoples in Carpathian Rus' The Roman Empire and the Dacians 3. The Slavs and their arrival in the Carpathians The Huns and the displacement of peoples The origin-of-peoples fetish Is DNA the reliable way? The Slavs and Carpathian Rus' Dwellings of the early Slavs The White Croats and the Avars 4. State formation in central Europe The Pax Romana and the Byzantine Empire Greater Moravia Saints Constantine/Cyril and Methodius Christianity becomes "our" religion Who among the East Slavs first received Christianity? The Magyars and Hungary Historical memory and political reality The rise of Poland Kievan Rus' The Great Debate: the origin of Rus' 5. Carpathian Rus' until the early 16th century Formation of the Hungarian Kingdom A medieval Carpatho-Rusyn state: fact or fiction? The Mongol invasion and the restructuring of Hungary The Vlach colonization Kings, nobles, and the implementation of serfdom Poland: administrative and socioeconomic structure The fall of Constantinople and the decline of Orthodoxy 6. The Reformation, the Counter-Reformation, and Carpathian Rus' The Ottoman Empire in central Europe The Protestant Reformation The Catholic Counter-Reformation Poland and church union Uniates/Greek Catholics: A new church or a return to the old? Transylvania and church union in Hungary 7. The Habsburg restoration in Carpathian Rus' Rakoczi's "War of Liberation" Habsburg Austria's transformation of Carpathian Rus' The Bachka-Srem Vojvodinian Rusyns Poland and Galicia's Lemko Region 8. Habsburg reforms and their impact on Carpatho-Rusyns The reforms of Maria Theresa and Joseph II Uniate/Greek Catholics and the Enlightenment in Carpathian Rus' Carpatho-Rusyns become an historical people 9. The Revolution of 1848 and the Carpatho-Rusyn national awakening The multicultural Austrian Empire Kakania's emperors and kings What is nationalism and what are national movements? Nationalism in Hungary From inferiority to superiority: the transformation of a dangerous complex Revolution in the Austrian lands and Hungary The Carpatho-Rusyn national awakening: politics The first Carpatho-Rusyn political program The Carpatho-Rusyn national awakening: culture Did Carpatho-Rusyns really love the Russians? 10. Carpathian Rus' in Austria-Hungary, 1868-1914 The Dual Monarchy and Austrian parliamentarism In search of a Rus' national identity The national awakening in the Lemko Region Hungary and its magyarization policies Magyarization despite the letter of the law Carpatho-Rusyns in Hungarian politics Carpatho-Rusyns and national survival Socioeconomic developments Was life in pre-World War I Carpathian Rus' so destitute? 11. Carpatho-Rusyn diasporas before World War I Migration to the Srem, Banat, and Bachka Emigration abroad to the United States Rusyn-American religious and secular organizations Rejected Greek Catholics and the "return" to Orthodoxy "You are not a proper priest" "Ruthenians" become Uhro (Hungarian)-Rusyns, or Russians, or Ukrainians Rusyn Americans and international politics 12. Carpathian Rus' during World War I, 1914-1918 The end of civilized Europe World War I in Carpathian Rus' The war against Carpatho-Rusyn civilians Magyarization reaches its peak 13. The end of the old and the birth of a new order, 1918-1919 National self-determination and socialist revolution Rusyn Americans mobilize politically Political mobilization in the Carpatho-Rusyn homeland Hungary's autonomous Rus' Land The Ukrainian option The meaning of Ukraine Carpatho-Rusyns on the international stage 14. Subcarpathian Rus' in interwar Czechoslovakia, 1919-1938 Czechoslovakia and &