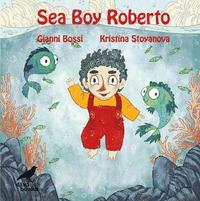 av Gianni Bossi
Häftad Engelska, 2019-02-14
79
Köp
Spara som favorit
Skickas inom 7-10 vardagar.
Gratis frakt inom Sverige över 159 kr för privatpersoner.
Come with Roberto the Sea Boy on a visit it his friends who live deep in the ocean. You'll meet turtles, a tonguefish, and even a giant whale. Would you like to meet Roberto too? Inside, he gives you the secret of how to meet him. Seas all around the world are in trouble. They need your help. So does Roberto
Visa hela texten

Born in a small Italian sea-side town in 1978, Gianni Bossi learned the art of fishing from his father. An amateur fisherman, his father instilled in him a love of the sea. Gianni began to take an interest in environmental issues when studying at university in Bologna. After completing his Master's Degree, he decided he would write books for children. His books often include stories about the sea. Currently living in the United States, Bossi is married with four children. Kristina Stoyanova was born in Sofia, Bulgaria, where she graduated from the National Art Academy After several years working as a graphic designer in advertising agencies, she is now working exclusively as an illustrator. Her art is inspired by fairy tales and the stories she creates. She also likes to add a pinch of humour to them.