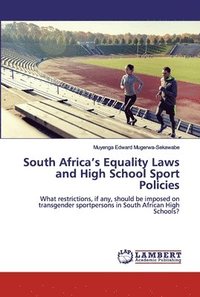 av Muyenga Edward Mugerwa-Sekawabe
Häftad Engelska, 2019-12-13
469
Köp
Spara som favorit
Skickas inom 10-15 vardagar.
Fri frakt inom Sverige för privatpersoner.
South African high schools typically utilise a sex-segregated approach to sports teams and, therefore, have "boys" sports teams and "girls" sport teams. This approach is complicated by the increasing number of high school learners who openly identify as transgender. School policies must be consistent with Promotion of Equality and Prevention of Unfair Discrimination Act (PEPUDA) in order to be legally compliant. Subsequently, I argue that both partially and fully inclusive policies are lawful. As both these policies are lawful, a choice must be made regarding which set of policies to adopt. When making this choice, a school must consider which values it seeks to promote. On the one hand, there is the imperative to acknowledge the dignity of trans learners while, on the other hand, there are legitimate concerns about the fairness of competition. As dignity is both a right that is granted by the Constitution, and one of its the founding values, I argue that fully inclusive policies should be favored as they result in the validation of trans learners' dignity.
Visa hela texten