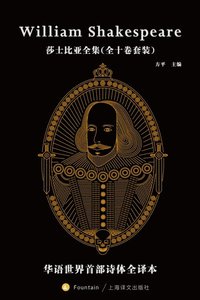 The Complete Works of Shakespeare

av Shakespeare
Häftad Kinesiska, 2014-01-01
4749
Köp
Spara som favorit
Specialorder (osäker tillgång). Skickas inom 11-20 vardagar.
Fri frakt inom Sverige för privatpersoner.
William Shakespeare (1564-1616), the greatest playwright and poet of the Renaissance in England, and the great writer of European Renaissance literature on humanism.He is a great drama poet who is unprecedented and can be said to be the greatest. He is the world's greatest writer.After nearly a century of hard work by several generations of translators, the Mandarin-speaking world now has five translations of Shakespeare's complete works. The previous four editions are all prose style translations, and three of them are written by famous translator Zhu Shenghao. The translated version is the original and subjective (the independentversion translated by Mr. Liang Shiqiu is also prose style)This edition edited by Mr. Fang Ping is the first translated version of Shakespeare written in poetic style.The original appearance of Shakespeare's plays is a poetic drama. It is a poetic drama based on the blank verse. It uses poetry to translate poetry and try to make the translation closer to the original appearance of Shakespeare in terms of tone and rhythm. This is the version The ultimate appeal.It does not matter whether this translation is the latest. Mr. Fang Ping studied Shakespeare for his life. He was the Chairman of the Chinese Shakespeare Association and executive director of the International Shakespeare Association.This translated version is thus incorporated into the latest Shakespearean research results. Each drama and poetry work has a &quotepreface&quote-- analyzing the artistic features, character images, and ideological themes of the work, making a proper synthesis of the work; and followed by a brief and concise &quotetextual research&quote-description of the version of the work, the year of writing, and the source of the material.The new Shakespeare Complete Works fully absorbed the latest achievements of the international Shakespeare study results and included a total of 39 plays of Shakespearean (in addition to the traditional thirty-seven books, they also included The Two Noble Kinsmen and Edward III), and the poetry part was collected in the 1980s and 1990s as the long poetry of Shakespeare's poem Mourn for the Dead, and &quoteComplete Work&quote has more than 4.7 million words. It can be regarded as the most complete and collated in the Chinese-speaking world, and also has academic and readable first poetry translations of Shakespeare's complete works. The publication of this &quoteComplete Works&quote will have landmark significance.
Visa hela texten