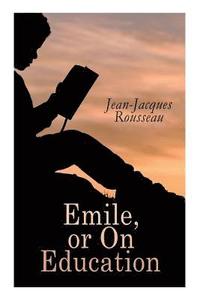 Emile, or On Education

av Jean-Jacques Rousseau, Barbara Foxley
Häftad Engelska, 2019-04-15
119
Köp
Spara som favorit
Skickas inom 10-15 vardagar.
Fri frakt inom Sverige över 159 kr för privatpersoner.
Finns även som
Visa alla 2 format & utgåvor
"Emile, or On Education" or "mile, or Treatise on Education" is a treatise on the nature of education and on the nature of man. Jean-Jacques Rousseau considered it to be the "best and most important" of all his writings. Due to a section of the book entitled "Profession of Faith of the Savoyard Vicar", Emile was banned in Paris and Geneva and was publicly burned in 1762, the year of its first publication. During the French Revolution, Emile served as the inspiration for what became a new national system of education. Rousseau seeks to describe a system of education that would enable the natural man he identifies in The Social Contract (1762) to survive corrupt society. He employs the novelistic device of Emile and his tutor to illustrate how such an ideal citizen might be educated. Emile is scarcely a detailed parenting guide but it does contain some specific advice on raising children. It is regarded by some as the first philosophy of education in Western culture to have a serious claim to completeness, as well as being one of the first Bildungsroman novels.
Visa hela texten