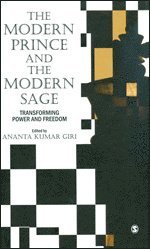 The Modern Prince and the Modern Sage

av Ananta Kumar Giri
Inbunden Engelska, 2009-09-10
519
Köp
Spara som favorit
Skickas inom 5-8 vardagar.
Fri frakt inom Sverige för privatpersoner.
Finns även som
Visa alla 1 format & utgåvor
Ever since the Renaissance in the thirteenth century, the ?prince? has been the dominant archetype of ?being? and ?becoming?. Power and politics have provided the modern world with determinant frames of self-constitution and social emancipation, along with a singular definition of ?freedom?. In this context, The Modern Prince and the Modern Sage: Transforming Power and Freedom is concerned with rethinking and transforming the concepts of ?power? and ?freedom? in discourse, society and history.

This book draws from various sources?traditions of wisdom, creative experiments in socio-political theorizing and spiritual mobilizations?and brings together voices of struggle and movements for creative transformations from around the world. It addresses epochal issues of our times such as responsibility and shared sovereignties and appeals to a wide readership in humanities and social sciences and would be of interest to all seeking souls and movements. It will also be an invaluable reading resource for students and researchers of social and political theory, philosophy, sociology, anthropology, development studies, cultural studies and religious studies.
Visa hela texten

Ananta Kumar Giri has been furrowing in the frontier regions of contemporary sociological theory. He and a most admirable group of social theorists and philosophers from several countries find that even their frontier worlds are pervaded by mutual challenges between power-craving princes and freedom-seeking sages. Giri has assembled here 29 cutting-edge essays and much-needed wise reflections on vitally important topics such as development ethics and poverty, the power of non-violent movements, and the moral dimension in world history, Islam and human rights, Buddhist reflections on human security, Gandhian empowerment, and the example of the construction in South Africa of structures of cooperations

As one reads the volume one is touched by the intellectual honesty of the authors and by their probing analysis of ideas and practices relating to power and freedom.

Ananta Kumar Giri is currently on the faculty of Madras Institute of Development Studies, Chennai, India and has worked and taught in many universities in India and abroad including Free University,

Amsterdam, University of Kentucky, Aalborg University, Denmark and Albert Ludwigs Universitt, Freiburg, Germany where he was a Humboldt Fellow (20062007). He has an abiding interest in social movements and cultural change, criticism, creativity and contemporary dialectics of transformations, theories of self, culture and society, and ethics in management and development. Dr Giri has written more than a dozen books in Oriya and English. Among his previous books are: Global Transformations: Postmodernity and Beyond (1998), Sameekhya o Purodrusti [Criticism and the Vision of the Future, 1999], Conversations and Transformations: Toward a New Ethics of Self and Society (2002); Building in the Margins of Shacks: The Vision and Projects of Habitat for Humanity (2002); Reflections and Mobilizations: Dialogues with Movements and Voluntary Organizations (2004); Self-development and Social Transformations? The Vision and Practice of the Self-study Mobilization of Swadhyaya (2008); Mochi o Darshanika [The Cobbler and the Philosopher, 2009] Rethinking Social Transformation: Criticism and Creativity at the Turn of the Millennium (editor, 2001); A Moral Critique of Development: In Search of Global Responsibilities (co-editor, 2003); Creative Social Research: Rethinking Theories and Methods (editor, 2004) and Religion of Development, Development of Religion (co-editor, 2004).

Foreword - Johan Galtung Introduction: Transforming Power and Freedom - Ananta Kumar Giri PART ONE: RECONSTITUTING POWER AND FREEDOM: MODERNITY AND BEYOND Modernity and the Reconstitution of the Realm of the Political - N Eisenstadt Play of Power and Struggle for Freedom in Renaissance Humanism - Felix Wilfred Political Symbolism or How to Stay on the Surface - Frank R Ankersmit Control of Power Through Freedom: An Issue in Kant's Political Philosophy - Binod Kumar Agarwala Power of Modernity and the Tail of the Devil - Philip Quarles van Ufford Rethinking Power: Aesthetics, Dialogue, Hegemony - Kanchana Mahadevan Metamorphoses of Power: From Coercion to Cooperation? - Jan Nederveen Pieterse PART TWO: BEYOND THE MODERN PRINCE: VARIETIES OF STRUGGLES AND NEW INTIMATIONS Power as Subordination and Resistance as Disobedience: Non-Violent Movements and the Management of Power - Stellan Vithagen Power From Below: Indonesian Reflections on the Paradigm of Power - Bernard Adeney-Risakotta Social Transformation in Contemporary Korea: Three Prime-Movers in the Contested Civil Society - Sang-Jin Han Beyond Powerlessness: Celebrating the Power of the Displaced - Jose Jowel Canuday Globalization, Democracy and the Aesthetic Ecology of Emergent Publics for a Sustainable World: Working from John Dewey - Herbert G. Reid and Betsy Taylor In Search of Structures of Cooperation: The Discursive Construction of Morality in the Land Reform Dispute in Post-Apartheid South Africa - Piet Strydom The Walking Rebellion: The Zapatista's Struggle for Autonomy and the Difficulties of Social Change - Mateo Mier y Teran A Yearning of the Heart: Spirituality and Politics - Helena Tagesson PART THREE: TRANSFORMING POWER AND FREEDOM: NEW HORIZONS Power and Wisdom: Does World History Have a Moral Dimension? - Akop P Nazaretyan Towards a Critical Biography and Legacy of the Rishis: Kautilya and the Calling of Political Ethics - Godavarish Mishra Meister Eckhart: The Power of Inner Liberation - Dietmar Mieth A War Against the Turks? Erasmus on War and Peace - Fred R Dallmayr Machievelli, The Prince and Leadership Responsibility - Sapir Handelman Transforming Power and Freedom: From Voluntary Servitude to Non-Violent Resistance - Christian Bartolf Gandhi and Empowerment - Mrinal Miri None is Free Until All Are Free: Sartre's Ontology of Freedom and His Politics - Robert Bernasconi Rethinking Freedom in the Face of Ecological Crises - Mark Lindley Power and Self-Cultivation: Aesthetics, Development Ethics and the Calling of Poverty - Ananta Kumar Giri Reflections on Human Security: A Buddhist Contribution - Thanh-Dam Truong Towards an Islamic Hermeneutics for Human Rights - Abdullahi A An-Naim Beyond Power: Alternative Conceptions of Being and Reconstitution of Social Theory - John Clammer An Afterword - Chitta Ranjan Das