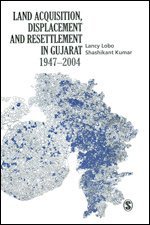 av Lancy Lobo
Inbunden Engelska, 2009-03-17
679
Köp
Spara som favorit
Skickas inom 10-15 vardagar.
Fri frakt inom Sverige för privatpersoner.
This book is a first-ever detailed analysis of the land acquired for development projects and their impact on the displaced and project-affected people of Gujarat, from 1947 to 2004. It begins with a debate on the meaning of the term ?development? and focuses on displacement, marginalisation and impoverishment as direct consequences of admittedly debatable methods of progress adopted in Gujarat in the name of development.

The book presents a comprehensive account of land acquired for water resources, industries, mines, HRD, transportation/communication, and urban development projects and focuses on the people displaced and affected by them. Additionally it pays special attention to the legislative hurdles in rehabilitation and compensation procedures which follow displacement, analysing the behaviour of officials towards people, the role of village leaders and the impact on people, especially tribals, dalits, the ?backward? castes, women and children.

The information presented covers 139 sites and 1,937 households from different regions of Gujarat. The book is special in that it discusses the issue of the current and future state of land acquisition in Gujarat as a Special Economic Zone (SEZ), thereby contributing to the debate on the necessity and the significance of SEZs.

This book is an important addition to the available resources in the field of economics and development studies and political sociology. It will be useful as a reference book to researchers and academics working in these areas as well as the professionals involved in the field.
Visa hela texten

Lobo and Kumar deserve rich appreciation for arduously generating a goldmine of data sets on this subject and then incisively analyzing them…. The book is an excellent addition and it will have a long shelf life.

The authors of this volume have painstakingly gathered data from various research centres, universities, government departments/project authorities, ministries and government gazettes on all the developmental projects in Gujarat and analyzed the impact of displacement and deprivation on various strata of society. The information presented covers 139 sites and 1,937 households from different parts of the state over a period of 60 years. This study also includes a sample survey of project-affected households, with special reference to tribal people, dalits, and Other Backward Castes…. The authors…see development-induced displacement, resettlement and rehabilitation not just from the academic point of view. They address the issue of public policies related to land acquisition, resettlement, and rehabilitastion as well. They also touch upon the trends in land acquisition and transfer in the state by referring to the Government of Gujarat Special Economic Zone Act, 2004…. This book is a welcome addition to the existing literature on land acquisition, displacement, and rehabilitation.

It provides a well documented data base to show the actual trend of displacement and dispossession over a period of time and leaves no room for speculation… a book that puts the facts and figures right for both those who are fighting for the rights of the dispossessed and the representatives of the democratic nation state is a welcome contribution.

Lancy Lobo is Director at the Centre for Culture and Development, Vadodara. Earlier, he had served as the Director, Centre for Social Studies, Surat. He has conducted extensive studies on the tribes, Dalits, OBCs and minorities in rural and urban Gujarat. He has authored six books and has contributed several articles to professional journals. His published works include The Thakors of North Gujarat Poor in Urban India: Study of Surat Slums (co-authored with Biswaroop Das) and Communal Violence and Minorities: Gujarat Society in Ferment (coedited with Biswaroop Das). He was an International Fellow at the Woodstock Centre, Georgetown University, Washington DC (19992000) during which he worked on Globalisation, Hindu Nationalism and Christians in India. At present, he is working on degradation of forests and its impact on the tribals of Gujarat.

Shashikant Kumar, planning consultant in the area of urban and regional planning, has focused his interests on development planning issues in India in general, and Gujarat in particular. He is presently involved in research related to development planning, evaluation and spatial analysis techniques in various organisations. Earlier he held the position of Vice President, Scanpoint Geomatics Limited (Ahmedabad); and Associate Project Director (DIDR Project), Centre for Culture and Development (Vadodara). At various stages of his professional career, he has provided consultancy to Indian Institute of Technology Kanpur, 19992000; Centre for Culture and Development, Vadodara, 2003 to till date; Green Eminent, 1997 to till date; and various other institutions. He is a visiting faculty in the Faculty of Science, The Maharaja Sayajirao University of Baroda; and Bhaikaka Institute of Human Settlement, APIED, Sardar Patel University, Vallabh Vidhyanagar.