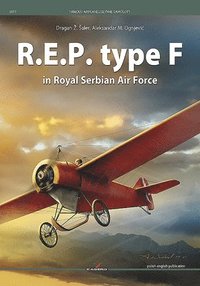 av Dragan Z Saler, Aleksandar M Ognjevic
Häftad Engelska, 2019-10-10
209
Köp
Spara som favorit
Skickas inom 10-15 vardagar.
Fri frakt inom Sverige för privatpersoner.
By the turn of the events, at the very begging of the first Balkan war, entirely unexpectedly an example of R.E.P type F fell into the hands of the Serbian Army. This example was ordered by the Ottoman empire, and when the war started it was crated in a railway wagon within a composition which was at the time located at the railway station in Toponica near Nis. Even though Serbia later had to pay for the confiscated example, "the present" was welcomed by the Serbian Army Command which hurriedly worked to equip and to organize its own air force. This book describes the use of the sole example of R.E.P. airplane which carried the colors of the Kingdom of Serbia. The authors tried to "leave no stone unturned" searching for rare information concerning this almost forgotten airplane. They thoroughly searched domestic and foreign archives, magazines and collections. This book covers largely the construction and all the details related to the tactical and technical characteristics of this extraordinary airplane. The contents are supplemented by numerous 2D, 3D and technical drawings, which for the first time detail even the smallest construction details, assemblies, engine, equipment as well as camouflage and markings schemes of this rare and unique airplane.
Visa hela texten