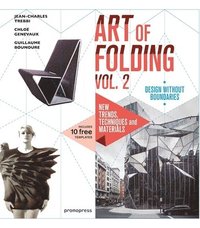 Born in Paris, Jean-Charles Trebbi is an urban architect, designer, artist and writer. A Renaissance man who specializes in the infinite possibilities of folding, cutting and assembling using paper, cardboard, textiles and even wood and metal, influenced by Bruno Munari, Katsumi Komagata, et Masahiro Chatani he creates his own art books, which are often inspired often by urban spaces and architecture, and produces completely original structures with pop-up and cutting techniques. He is author of several books on cutting, folding and pop-up techniques for all sorts of materials and on near-natural architecture. Chloe Genevaux and Guillaume Bounoure live and work in Montpellier (France). The architect duo co-founded the collective Archiwaste which, since 2006, realizes experimental ephemeral constructions. Their research aims to give value to new or underestimated materials like cardboard. They are specialists in three-dimensional modelling of non-conventional forms based principally on folding. After realizing from 2007 to 2014 architectural projects oriented to improve environmental quality, the couple is dedicated to parametric design as part of the BOU-GE workshop they founded in 2015.