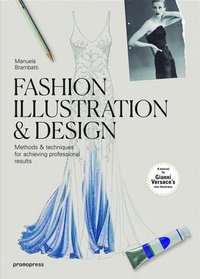 av Manuela Brambatti
Häftad Engelska, 2017-08-11
239
Köp
Spara som favorit
Skickas inom 7-10 vardagar.
Fri frakt inom Sverige för privatpersoner.
A design tutorial by Daniela Brambatti, Versace's chief (design) illustrator, the book is an idea of couturier Flavio Marconi who, impressed by her drawing style and the precision with which she captures the flow of fabric over the body, convinced her to put it into print. Here Brambatti reveals her fresh and innovative style, halfway between fashion sketching and illustration.
Visa hela texten

"Just wanted to say how much I love the book and how much I get inspired by these amazing illustrations! Thank you for sharing your techniques ! It helps a lot !" Anastasiya Hubar, stylist Club Monaco, NY USA.--Anastasiya Hubar "Letter to the author " "This book has been added to our recommended further reading list to support our students with their Life drawing/fashion Illustration studies. For our BA Fashion course. The book shows great examples of pencil drawings and also of colour added/finished result. Brilliant to see accessories/ceramics/homeware designs too. It is a lovely heavy glossy book which has been well organised and carefully written. Good to see that it shows which art materials are required to create a certain look. It would have been enhanced further by including how to use computer aided design in the illustration process, as this an industry standard now taught at degree level." Tracy Flounders - Lecturer - BA Hons Surface Pattern Design/Textile Surfaces/Fashion, School of Creative Arts & Engineering, Staffordshire University, Stoke-on-Trent, UK

Manuela Brambatti began her career in the fashion world in the late seventies through working for Style and other fashion magazines. She has collaborated with Giorgio Correggiari, Krizia and Gian Marco Venturi, but her most important and far-reaching experience is her work with Gianni Versace. As an employee and later exclusive partner of the Versace fashion house from 1981 to 2009, Ms. Brambatti played a crucial role in setting standards with regard to the presentation and illustration of fashion collections and, in later years, of the Home Collection. Currently a freelancer, she works with various young contemporary designers and jewellery houses and produces illustrations for firms in the fashion and design industries. Her designs are featured in several books on Versace.Bruno Gianesi joined Gianni Versace s design team in 1984, where he remained for sixteen years as head stylist and manager of theatrical projects. He designed and curated the creation of costumes for respected choreographers and directors such as Maurice Bejart, Roland Petit, William Forsythe and Bob Wilson, and he also designed clothing for famous members of the international jet set, including Elton John, Madonna, Lady Diana and Sting. Bruno s art has naturally evolved to take a more intimate direction through painting, and he has shifted his creative focus from the outside world to his own interior microcosm.Tony di Corcia works as a professional journalist, though he graduated from university with a degree in law. He has written about fashion for the newspapers Corriere della Sera and Repubblica, and he also runs the website Viveur.it. He has published a book featuring interviews with Versace entitled Gianni Versace: lo Stilista dal Cuore Elegante, as well as a biography on the famous couturier and a collection of interviews with different people on Versace."