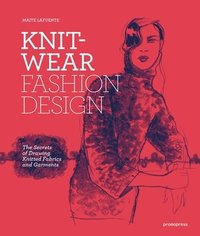 The Secrets of Drawing Knitted Fabrics and Garments

av Maite Lafuente
Häftad Engelska, 2017-08-14
329
Köp
Spara som favorit
Skickas inom 3-6 vardagar.
Fri frakt inom Sverige för privatpersoner.
Knitwear Fashion Design aims to help fashion students to understand the basic design elements in knitwear and learn how illustrate them. Whether handmade or industrially- produced, deconstructive or avant-garde, knitwear has now become a staple collection piece every season and its resurgence as a key fashion item has rekindled a trend and a keen interest in this once very traditional craft. Developments in modern techniques, the revival of traditional craft skills and a new appreciation of couture craftsmanship have put knitwear back into the fashion spotlight. This practical book begins with a thorough exposition of basic yarns and threads, picot, mohair s, knots, together with a brief description about their structure and illustrations for each example. Together with a thorough presentation of a variety of patterns and complements ending with the most common knitwear types, it is documented by a range of suitable poses in movement based on contemporary apparel. Offering an extensive overview about yarn types, garment, accessories and finishes this book also teaches how to transform and renovate basic pieces. Various attractive designs are shown as well as the stitches needed to create and illustrate these garments such as cable, Aran, jacquards, ribs etc. Whether hand knitted or industrially produced the book is a glorious celebration of the new vogue in knitting, showcasing examples of knitted pieces from fashion great designers. Encouraging the reader to be innovative, this book is sure to be an inspiration for anyone working with or interested in knitted textiles and garment illustration. "
Visa hela texten

Maite Lafuente Maite Lafuente is an illustrator and fashion designer. As an illustrator, she has been published in advertising and textile publications such as Collezioni. As a fashion designer, she has created many knitwear collections and led fashion and cosmetic trends in the market. She teaches fashion illustration and knitting in several fashion schools in Barcelona, including the Istituto Europeo di Design and the Escola Superior de Disseny. She also leads workshops in fashion and illustration around Europe. She has been widely published by Pageone, Rockport and Evergreen among others.Charo Mora Solanilla holds a degree in art history from the University of Barcelona. Since 1998, she has been working as a fashion journalist and a professor of history of fashion and emerging trends at Ramon Llull University s ESDi Higher School of Design. As a curator and researcher, she has been involved in several major fashion projects, including Moritz Feed Dog, a festival of documentary films on fashion and culture. "