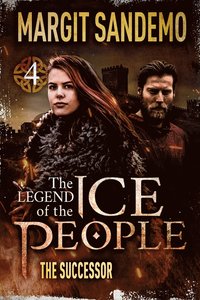 The Ice People 4 - The Successor (e-bok)

Volume 4 in Margit Sandemo?s breathtaking series about The Ice People

Yrja Mattiasdatter is heavy, unshapely, and disfigured from sickness. Because of her unattractiveness, she is nicknamed The Thistle. But she has another burden to bear: she is madly and deeply in love with the rich and charming Tarald, son of Baron Dag Meiden and Liv of the Ice People. However, Tarald only has eyes for his beautiful cousin, Sunniva. Yet due to the evil legacy of the Ice People, a union between Yrja and Tarald could be auspicious?

While Norway is being ravaged by the plague, Tarald?s sister, Cecilie, finds herself in Denmark where she helps caring for King Christian IV?s children with Kirsten Munk. Cecilie is intrigued by Margrave Alexander Paladin but holds no attraction for him.