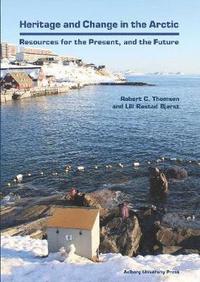 Heritage &; Change in the Arctic

Resources for the Precent & the Future

av Robert C Thomsen
Inbunden Engelska, 2017-05-09
609
Köp
Spara som favorit
Specialorder (osäker tillgång). Skickas inom 11-20 vardagar.
Fri frakt inom Sverige för privatpersoner.
In recent years, rapid changes to Arctic environments and conditions have spurred much anal-ysis into the melting of sea and inland ice, the opening up of new sea routes, impacts on flora and fauna, and increased access to globally desired resources. In this book the focus is di-rected at a more rarely considered aspect of climate-induced change in the region: the Arctic cultures and societies that both affect and are themselves affected by the changes. For the people of the Arctic, change provokes and re-emphasises positions as rights and landholders, as well as ambivalent positions as stakeholders, developers and wardens of resources. In times characterised by such change and ambivalence, heritage offers itself as a means by which a community can meaningfully relate to both past and future; but its use (and the inclusion and exclusion of particular identity-building elements) must also be continuously negotiated. In this book scholars from the social and human sciences explore change and transformation from two resource-inspired angles: it keeps a constant focus on the impact of change on tangible and intangible heritage, as well as on some of the cultural and social heritage features that must themselves be considered as resources in an environment characterised by change.
Visa hela texten