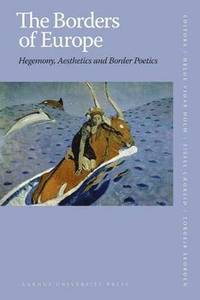 av Helge Vidar Holm, Sissel Laegreid, Torgeir Skorgen
Inbunden Engelska, 2012-01-01
359
Köp
Spara som favorit
Skickas inom 7-10 vardagar.
Fri frakt inom Sverige för privatpersoner.
Just like national identities, European identity may be viewed as an imagined community, constituted by different levels of inclusion and exclusion along various border markers as those between included and excluded, between culturally dominating and dominated or between centre and periphery, natives and exiled. This book by researchers within the field of art and architecture, theatrical performance, literature and history, is an important contribution to the ongoing discussion of the borders of Europe, especially where large scale cultural borders towards the East are concerned. The Borders of Europe offers an interdisciplinary perspective on the notion of Europe and its regions, its origins and transformations while highlighting the aesthetics of hegemony and conceptions of centre and periphery in Europe, constructions of national, regional and artistic identity and the aesthetics and poetics of borders in literature and art.
Visa hela texten