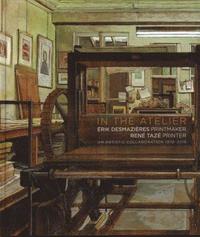 av Erik Desmazieres
Inbunden Engelska, 2019-02-27
309
Köp
Spara som favorit
Skickas inom 7-10 vardagar.
Fri frakt inom Sverige för privatpersoner.
Erik Desmazieres's first love was drawing and he began engraving in the Ville de Paris studios from 1971. Rene Taze joined the Leblanc studio, a famous and ancient Parisian intaglio printer's workshop in 1969. It was here, on Rue Saint-Jacques, the printers' quarter since the seventeenth century, where they met: in this corner of Paris imbued with history. In the spring of 1978, Rene Taze opened his own studio at 11 Rue Hittorf, by the side of the town hall in the tenth arrondissement in Paris. The printer and the artist then established a professional bond that has lasted up to the present day. During the four decades of their work together, they have made over 200 prints and no fewer than 20,000 proofs in various formats; their preparation benefited greatly from the skill and noteworthy talent of Rene Taze, who was awarded the title of Maitre d'Art in 2006. While Rene Taze made the prints, Erik Desmazieres began to draw his surroundings, by which he was much inspired. The result was a set of seven large engravings made from 1979 onwards depicting the studio and its wonderful machines from different angles. In 2006, Rene Taze was forced to leave his studio, which was to be demolished. He moved to a studio in Villa du Lavoir, near Porte Saint-Martin, not far from where he worked previously. The new studio was far more 'modern' and more maze-like, but just as inspiring and gave rise to an engraving of the studio just before its conversion: Atelier Rene Taze VIII, 2018. The renovated studio offered the engraver the chance to make a new work of the space, which had a completely different layout: Atelier Rene Taze IX. Text in English and French.
Visa hela texten

Alain Madeleine-Perdrillat is an art historian and was born in Paris in 1949. For many years he worked at Reunion de musees nationnaux, then at the Institut national d'histoire de l'art. He has written a monograph on Seurat (Skira, 1990), a study of Nicolas de Stael (Hazan, 2003), and essays on various writers, poets, and painters. He has also translated several works by Roberto Longhi, The Life of a Painter, by Gino Severini (Hazan, 2011), and recently The Originality of Thomas Jones by Lawrence Gowing (Fage editions, 2017).