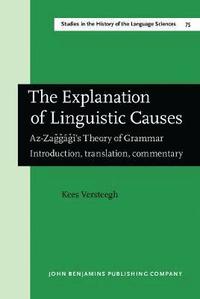 The Explanation of Linguistic Causes

av Kees Versteegh
Inbunden Engelska, 1995-05-01
1779
Köp
Spara som favorit
Specialorder (osäker tillgång). Skickas inom 11-20 vardagar.
Fri frakt inom Sverige för privatpersoner.
The ultimate aim of every linguistic tradition is to go beyond the purely descriptive level and seek an explanation for linguistic phenomena. Traditions differ, however, with regard to the class of linguistic phenomena they wish to explain and the framework in which they define their explanation. In this volume the English translation is presented of the treatise on linguistic explanation by the 10th-century Arab grammarian az-Zaggagi, one of the most original thinkers of the Arabic tradition. He worked in a period in which the influence of Greek logic and philosophy made itself felt in almost all Arabo-Islamic disciplines. Some of the problems he deals with are familiar to modern linguists (e.g., morphological segmentation, categorization of parts of speech), others are comprehensible only within the frame of reference of Arabic linguistics (e.g., the declension of the verb). An extensive commentary on the text analyzes the problems discussed, both within the Arabic tradition and from the point of view of modern linguistics. Apart from the index of names and terms, there is an index of subjects which enables the general reader to consult text and comments on specific key notions.
Visa hela texten