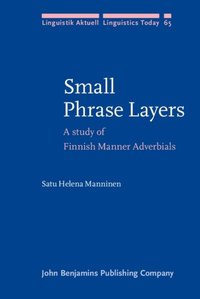 A study of Finnish Manner Adverbials

av Manninen Satu Manninen
E-bok (PDF - DRM), Engelska, 2003-09-29
1189
Ladda ned
Spara som favorit
Laddas ned direkt
Läs i vår app för iPhone, iPad och Android
This monograph examines the structure and properties of Finnish manner adverbials. The central idea is that, instead of AdvPs, DPs, APs, PPs, NumPs and InfinitivalPs, manner adverbials have the form of either kPs or pPs, and they are licensed as unique specifiers of a manner-related small vP. Secondly, because &quoteobligatory&quote and &quoteoptional&quote manner adverbials are merged as specifiers of one and the same small vP, the computational system of language sees no difference between them. This is why &quoteobligatory&quote and &quoteoptional&quote manner adverbials often behave in exactly the same way with regard to syntactic operations such as movement. Thirdly, the author shows that, although all arguments and VP-internal adverbials are merged as specifiers of a unique small vP, this hierarchical structure need not always be reflected in an unambiguous linear order: in many languages VP-internal manner, place and time adverbials are allowed to permute freely because they have no features which would need checking by the features of a higher functional head, and because their original Spec,vP positions are &quoteinvisible&quote to the Linear Correspondence Axiom. Although the argumentation and analyses are mainly supported by Finnish data, the author also shows how they can be applied to other languages. The book also contains an extensive introduction to Finnish, to help readers unfamiliar with the language to follow the discussion.
Visa hela texten