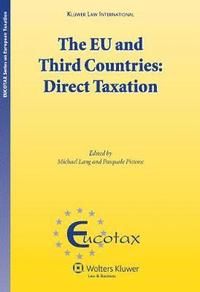 The EU and Third Countries

av Michael Lang, Pasquale Pistone
Inbunden Engelska, 2007-01-01
3379
Köp
Spara som favorit
Skickas inom 10-15 vardagar.
Fri frakt inom Sverige för privatpersoner.
Indirect taxation calls for a high degree of harmonization as it affects the free movement of goods and services. This is not the case for direct taxation, which is why the Treaty establishing the European Community (EC Treaty) does not make specific provision for the alignment of direct taxation. Some aspects of direct taxation do not need to be harmonized or coordinated and are left entirely to the discretion of the Member States. The situation is somewhat different when direct taxation has an impact on the four freedoms enshrined in the EC Treaty (free movement of goods, persons, services and capital) and the right of establishment of persons and businesses. National taxation systems must respect these four fundamental freedoms.However, direct taxation systems have never been harmonized in the Community. This area of European taxation is still rather unclear and rife with open questions. Consequently, the expert analysis offered in this book will be of significant interest to many international tax practitioners and academics. Among the areas addressed by this work are the following: The direct impact of Article 56 EC Treaty (Right of Establishment) in the relations with third States; the indirect impact of the fundamental freedoms in the relations with third States; fundamental freedoms in relation to EEA States under the EEA Agreement; agreements between Switzerland and the European Union; the relations with other third States in the field of direct taxes; the impact of Secondary EC Law on the relations with third States; Article 307 EC Treaty (Free Movement of Capital); and the treaty-making power of the European Union in the relations with third States.
Visa hela texten