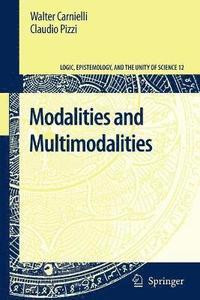 av Walter A Carnielli, Claudio Pizzi, Juliana Bueno-Soler
Häftad Engelska, 2009-11-02
1049
Köp
Spara som favorit
Skickas inom 10-15 vardagar.
Fri frakt inom Sverige för privatpersoner.
Finns även som
Visa alla 3 format & utgåvor
In the last two decades modal logic has undergone an explosive growth, to thepointthatacompletebibliographyofthisbranchoflogic,supposingthat someone were capable to compile it, would ?ll itself a ponderous volume. What is impressive in the growth of modal logic has not been so much the quick accumulation of results but the richness of its thematic dev- opments. In the 1960s, when Kripke semantics gave new credibility to the logic of modalities? which was already known and appreciated in the Ancient and Medieval times? no one could have foreseen that in a short time modal logic would become a lively source of ideas and methods for analytical philosophers,historians of philosophy,linguists, epistemologists and computer scientists. The aim which oriented the composition of this book was not to write a new manual of modal logic (there are a lot of excellent textbooks on the market, and the expert reader will realize how much we bene?ted from manyofthem)buttoo?ertoeveryreader,evenwithnospeci?cbackground in logic, a conceptually linear path in the labyrinth of the current panorama of modal logic. The notion which in our opinion looked suitable to work as a compass in this enterprise was the notion of multimodality, or, more speci?cally, the basic idea of grounding systems on languages admitting more than one primitive modal operator.
Visa hela texten

From the reviews: "This is mainly an introductory textbook on modal logic containing, apart from standard topics, some very important recent material which is not regularly included in other textbooks. [...] It is important to note that several of the different topics dealt with in the book are accompanied by philosophical remarks." Max A. Freund (San Jose), taken from his review of the Italian version Modalita e Multimodalita "This revised work constitutes an introduction to standard topics in modal logic. There are other sections presenting valuable material not generally included in elementary textbooks on modal logic ... . The book is written in a clear and agreeable style and useful exercises and references for further reading are given at the end of each chapter. ... Due to all these features, the book is well suited for an introductory course in modal logic or as supplementary reading in an intermediate logic course." (Max A. Freund, Zentralblatt MATH, Vol. 1210, 2011)

Walter Carnielli is Full Professor of Logic, Department of Philosophy, State University of Campinas, Brazil. Ex-Director of the Centre for Logic, Epistemology and the History of Science (1998-2004) and full member of the Security and Quantum Information Group-- Institute of Telecommunications, Lisbon, Portugal. Grantee of the Alexander von Humboldt Foundation, Germany, held temporary positions and research appointments in the USA (University of California, Berkeley), as well as in several institutions in Chile, Colombia, Venezuela, Italy, Germany (Munster and Bonn), France, Spain, Portugal and Luxembourg. Carnielli is known for his contribution to the proof theory and semantics for contemporary heterodox (non-classical) logics. Of special significance are his contributions to many-valued logics, paraconsistent logics and combinations of logics. With his students and collaborators Carnielli introduced the possible-translations semantics, which led to a revival in the semantic interpretation of paraconsistent logics, and the concept of logics of formal inconsistency which systematize a great number of extant paraconsistent logics, opening the way to applications of paraconsistency to computer science and to philosophical investigations around the topic. Carnielli has also worked on finite and infinite combinatorics, and shaped, with collaborators, the modulated logics, a wide class of logics dedicated to formalize quantified uncertain reasoning. He is the author or co-author of more than academic 70 publications (papers, books and monographs). Claudio Pizzi is Full Professor of Philosophy of Science at the Faculty of Letters of the University of Siena (Italy) and contract professor at the University of Milano Bicocca. His main interests are in the field of general modal logic, conditional logic, tense logic and philosophy of causality. In 1973 he translated and edited the Italian version G.E.Hughes and M.J.Cresswell's "An Introduction to Modal Logic". In the past ten years he has been at the head of a research team which organized the international conferences of the series MBR (Model-Based Reasoning). He is author or coauthor of more that 70 publications , some of which published in Topoi, Notre Dame Journal of Formal Logic, Logique et Analyse, Journal of Philosophical Logic, Studia Logica. His main theoretical contributions concern a theory of rational inference based on the consequence relation (consequential implication) and a theory of causal relations based on iterated conditionals.