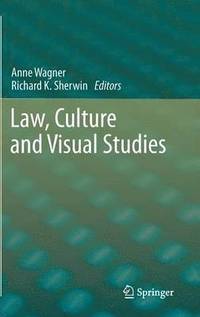 av Ms Anne Wagner, Richard K Sherwin
Inbunden Engelska, 2013-06-30
5199
Köp
Spara som favorit
Skickas inom 3-6 vardagar.
Fri frakt inom Sverige för privatpersoner.
Finns även som
Visa alla 1 format & utgåvor
The proposed volumes are aimed at a multidisciplinary audience and seek to fill the gap between law, semiotics and visuality providing a comprehensive theoretical and analytical overview of legal visual semiotics. They seek to promote an interdisciplinary debate from law, semiotics and visuality bringing together the cumulative research traditions of these related areas as a prelude to identifying fertile avenues for research going forward. Advance Praise for Law, Culture and Visual Studies This diverse and exhilarating collection of essays explores the many facets both historical and contemporary of visual culture in the law. It opens a window onto the substantive, jurisdictional, disciplinary and methodological diversity of current research. It is a cornucopia of materials that will enliven legal studies for those new to the field as well as for established scholars. It is a 'must read' that will leave you wondering about the validity of the long held obsession that reduces the law and legal studies to little more than a preoccupation with the word. Leslie J Moran Professor of Law, Birkbeck College, University of London Law, Culture & Visual Studies is a treasure trove of insights on the entwined roles of legality and visuality. From multiple interdisciplinary perspectives by scholars from around the world, these pieces reflect the fullness and complexities of our visual encounters with law and culture. From pictures to places to postage stamps, from forensics to film to folklore, this anthology is an exciting journey through the fertile field of law and visual culture as well as a testament that the field has come of age. Naomi Mezey, Professor of Law, Georgetown University Law Center, Washington, D.C., USA This highly interdisciplinary reference work brings together diverse fields including cultural studies, communication theory, rhetoric, law and film studies, legal and social history, visual and legal theory, in order to document the various historical, cultural, representational and theoretical links that bind together law and the visual. This book offers a breath-taking range of resources from both well-established and newer scholars who together cover the field of law's representation in, interrogation of, and dialogue with forms of visual rhetoric, practice, and discourse. Taken together this scholarship presents state of the art research into an important and developing dimension of contemporary legal and cultural inquiry. Above all, Law Culture and Visual Studies lays the groundwork for rethinking the nature of law in our densely visual culture: How are legal meanings produced, encoded, distributed, and decoded? What critical and hermeneutic skills, new or old, familiar or unfamiliar, will be needed? Topical, diverse, and enlivening, Law Culture and Visual Studies is a vital research tool and an urgent invitation to further critical thinking in the areas so well laid out in this collection. Desmond Manderson, Future Fellow, ANU College of Law / Research School of Humanities & the Arts, Australian National University, Australia
Visa hela texten

Anne WAGNER is an Associate Professor at the Universite du Littoral Cote d'Opale (France). She is a research member at the Universite Lille - Nord de France (Centre de Recherche Droits et Perspectives du Droit, equipe Rene Demogue: http://crdp.univ-lille2.fr/le-centre/ ). She is a research and adjunct Professor at China University of Political Science and Law (Beijing). She is a permanent member of the Instituto Subalpino per l'Analisi e l'Insegnamento del Diritto della Attivita Transanzionali (ISAIDAT with Prof. Rodolfo Sacco). She is the Editor-in-Chief of the International Journal for the Semiotics of Law (http://www.springer.com/law/journal/11196 - Springer) and the Series Editor of Law, Language and Communication (http://www.ashgate.com/default.aspx?page=3916 - Ashgate). She is President of the International Roundtables for the Semiotics of Law, Vice-President of the Multicultural Association of Law and Language (Hong Kong). She has lectured in Asia, Australia, Europe, and North America. She has extensively published research papers in the area of law and semiotics, law and criminology, legal discourse analyses, law and culture and legal translation. She is the editor of Images in Law (2006, Ashgate), Legal Language and the Search for Clarity (2006, Peter Lang), Interpretation, Law and the Construction of Meaning (2006, Springer), Obscurity and Clarity in the Law (2008, Ashgate), Diversity and Tolerance in Socio-Legal Context (2009, Ashgate), Prospects of Legal Semiotics (2010, Springer), Exploring Courtroom Discourse (2011, Ashgate). She is the author of La Langue de la Common Law (2002, L'Harmattan). She also has many editorial appointments as Guest Editor for Meta - Journal des traducteurs (2013) and Semiotica (2013). In 2009, Anne Wagner began investigating Visual Studies with a close connection to visual semiotics and the way empty spaces, shapes and garments can either subjugate or disrupt the public sphere and lead to disobedience, incivilities and crimes: Nation, Identity and Multiculturalism (Guest Editor - International Journal for the Semiotics of Law, vol.25/2: 2012), French Urban Space Management - A Visual Semiotic Approach behind Power and Control (A. Wagner, International Journal for the Semiotics of Law, vol.24/2, 2011), The Muslim Veil in France: Between Power and Silence, between Visibility and Invisibility (Hermes 46, 2011) . Richard K. SHERWIN is Professor of Law and Director of the Visual Persuasion Project at New York Law School. He is the author of Visualizing Law in the Age of the Digital Baroque: Arabesques & Entanglements (Routledge: 2011) and When Law Goes Pop: The Vanishing Line between Law and Popular Culture (University of Chicago Press: 2000 [2002]). He has written numerous chapters and articles on topics ranging from the interrelationship between law and culture, law and rhetoric, discourse theory, political legitimacy, and the emerging field of visual legal studies. Recent publications include: "Law's Life on the Screen," in Sara Steinert-Borella and Caroline Wiedmer, eds., Intersections of Law and Culture (Palgrave Macmillan: 2012); "Constitutional Purgatory: Shades and Presences Inside the Courtroom," in Leif Dahlberg, ed., Visualizing Law and Authority (Walter de Gruyter: 2012); "Visual Jurisprudence," in the New York Law School Law Review Symposium Issue on "Visualizing Law in the Digital Age" (Fall 2012); "Law's Screen Life," in A. Sarat, ed., Imagining Legality (Alabama: 2011); and "Imagining Law as Film: Representation without Reference?" in Austin Sarat, et. al., Introduction to Law and the Humanities, (Cambridge University Press: 2010). He edited and also contributed to Popular Culture and Law (Ashgate: 2006). In 2001, Professor Sherwin debuted Visual Persuasion in the Law, the first course of its kind to teach law students about the role and efficacy (as well as the pitfalls) of using visual evidence and v