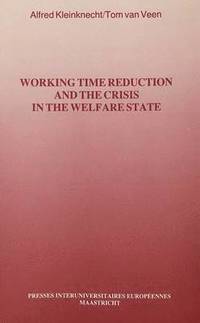 av Alfred Kleinnecht, Tom Van Veen
Häftad Engelska, 1999-05-01
319
Köp
Spara som favorit
Skickas inom 3-6 vardagar.
Fri frakt inom Sverige för privatpersoner.
During the crisis of the thirties many economists and others discussed working time reduction as a policy instrument to combat unemployment. Their contributions were mainly theoretical and contained only incidentally empirical information. However, confronted with persistent umemployment in the late seventies and eighties, the discussion on working time reduction has started up once again. Today, researchers use more and better statistical data and sophisticated macro-economic models to study the viability of working time reduction as an instrument of solving the unemployment problem in a socially acceptable way. Clearly, there are considerable differences in scope between the various contributions in this volume. The paper by Kok and de Neubourg reviews the empirical information at our disposal today and investigates what we can learn from it. It discusses the changes in working time over the past century in an international comparative context and developments in eight industrial countries are studied: Canada, France, West Germany, Japan, the Netherlands, Sweden, the United Kingdom and the United States. The paper by Schettkat also offers an economic analysis. The contribution of Dercksen and Soeters and that of Hinrichs, Offe and Wiesenthal, on the other hand, are mainly sociological. In looking at the incentives, constraints and options of the various actors, the latter two still arrive at rather different conclusions as to the way in which shorter working hours should, and can, be achieved.
Visa hela texten