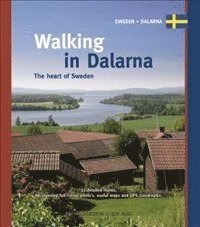 The Heart of Sweden

av Paul Van Bodengraven, Marco Barten
Spiral bound Engelska, 2014-01-01
169
Köp
Spara som favorit
Finns i lager! Skickas inom 1-2 vardagar.
Fri frakt inom Sverige för privatpersoner.
There is hardly anywhere more Swedish than Dalarna. A large part of the Swedish culture and folklore, from traditions to customs, which is cherished and (re)lived until this very day, comes from this region in the centre of the country. This cultural wealth can easily be combined with the natural beauty that the province has to offer in abundance: vast forests, beautiful lakes (big and small), abundant wildlife, quiet beaches and plenty of space to enjoy all this beauty. This guide 'Walking in Dalarna' describes twenty one day day-tours, spread across the province. The lengths vary from 6.4 to 18.7 km. Some routes are more difficult walks of almost an entire day, whilst others are easier and shorter. Visit the cradle of Swedish culture here. Hiking is an excellent way to discover what Dalarna has to offer. The 21 walks in this guide will show you the way to the most beautiful spots.
Visa hela texten

Paul van Bodengraven and Marco Barten are both passionate hikers. They have published nine walking guides so far, of which three have now been translated to English (Rhodes, Varmland and now Dalarna). Besides their regular jobs, each year they use their holidays to work on a new guide, on destinations that haven't been covered by others. Each walk is undertaken and described by the authors. They also take all the photos. The concept of the guides differs from any other series with much emphasis placed on pictures.