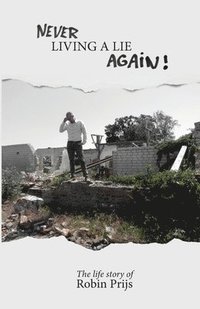 The life story of Robin Prijs

av Robin Prijs, Esther Prijs, Jane Upchurch Mcneill
Häftad Engelska, 2019-08-04
169
Köp
Spara som favorit
Skickas inom 10-15 vardagar.
Fri frakt inom Sverige för privatpersoner.
This is a true story like you probably haven't heard before. Born and raised in a Christian family, Robin grew up in Church and heard all about the gospel. Yet in his teenage years he decided to start a search into the occult, which eventually would cause him to surrender his life to satan. Caught in a life of lies, destruction and sin, it drove him to the point where he wanted to commit suicide. Until he met Jesus. He decided to turn his life around and started to follow Jesus, but from there the battle was far from over.

In this book Robin takes you on a journey through his life, through the good and the bad, while revealing his mistakes and failures, in a way like you seldom see these days. No political correctness, no keeping up appearances, but a real and vulnerable man, facing real battles. From being bullied most of his childhood, to a life of hate and plotting revenge, to following Jesus. From following Jesus to falling back into sins, to getting back up again, to falling back, to getting back up. The battle was enormous and the struggle was immense. While sharing his failures, he also shares about the lessons he has learned from it, which gives you insight in the way the enemy tries to ensnare you and how you can arm yourself against it.

Even though he came from a life of being humiliated, being beaten, being spit at, being scammed and being rejected, he choose to live a life of forgiveness and love. As you're about to see, that didn't come easy. In fact, it had nothing to do with the way he felt. There's still a God Who saves, heals, delivers and restores. The Blood of Jesus hasn't lost its power. Freedom is within reach.
Visa hela texten

“how old are you?”, she asked me, while looking intently at me. “i’m almost 40 years old,”, i replied, while giving her a faint smile. “that’s not old enough for an autobiography,” she smiled back. i remember just standing there, in a small village on the countryside, somewhere in the east of the netherlands, while i talked with the owner of the campground, where we were staying at that moment. yet again it was a wonderful day in the beautiful summer of 2018. the weather was incredible, especially for staying on a campground. later, that year would go down in history as one of the hottest and driest years. to me, that had a double meaning, since it felt exactly the same in a spiritual sense, and i don’t mean that in a positive way. but at least the weather was good. somehow you’ve got to stay positive, right? although this lady was right about my fairly young age, regarding writing an autobiography, she wasn’t aware of the enormous amount of events that happened in my life, which gave me more than enough material to write several books.

several years ago, i was watching a video on youtube, called removed, about foster care. at that moment, my wife and i were exploring the possibility of becoming foster parents. somehow some lines of what they were saying really stayed with me. they painted a picture of a family out of control, with physical abuse, from the eyes of a child. then she spoke these words: “sometimes someone hurts you so bad, it stops hurting at all. until something makes you feel again and then it all comes back. every word. every hurt, every moment. how could you ever understand where i come from? even if you ask, even if you listen, you do not really hear, see or feel. you don’t remember my story. you haven’t walked my path. you haven’t seen what i’ve seen.” later the poem continued with: “it seems like the same thing that held me up, forces me down. the world turned upside down, order disappeared. nothing was how it was supposed to be, and a heavy sadness filled my soul. deeper and deeper, i fell within myself, and nothing could draw me out. trapped in the misery of my life, lost in the sorrow of my soul. unable to see the light, unable to see the dawn, to feel, to hope, to dream.” while watching this video and hearing these words, i was bewildered. no one could have described me better than she did, in that video. that was exactly how i felt! trapped inside myself, unable to break out. left alone by all the people i once considered friends. yes, it even felt like i was betrayed by god himself. but i wasn’t a foster kid from a family out of control. i grew up in an ordinary family. so that’s not where that feeling came from. whatever it was, these few words nailed it for me.