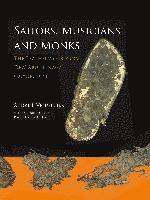 av Andre J Veldmeijer
Inbunden Engelska, 2017-04-14
2139
Köp
Spara som favorit
Skickas inom 7-10 vardagar.
Fri frakt inom Sverige för privatpersoner.
Finns även som
Visa alla 1 format & utgåvor
This volume describes, illustrates, and analysis the finds from the excavations at Dra Abu el-Naga, an important necropolis on the east bank of the Nile in Luxor (Egypt), which was in use from Middle Kingdom times until the early Christian era. Excavations of the site have been conducted by the German Archaeological Institute (DAI). A wide variety of leather objects or objects with leather parts have been discovered, including footwear, musical objects, loincloths as well as parts of furniture. The dating of these objects, mirroring the variety, ranges from Pharaonic to Ottoman. The present work describes these finds in detail, accompanied by colour photographs and drawings. The analysis includes the discussion of the provenance of the finds, the interpretation of the objects from a technological as well as typological point of view and dating. Dr. Andre J. Veldmeijer, Visiting Research Scholar of the American University in Cairo, has worked as an archaeologist in Egypt since 1995, specialising in, among other things, leatherwork and footwear. He (co-)directs several projects, including the Ancient Egyptian Leatherwork Project, which encompasses the Egyptian Museum Chariot Project and the Tutankhamun's Sticks& Staves Project. He has published extensively, both for scientific and popular audiences.
Visa hela texten

Andre J. Veldmeijer (Visiting Research Scholar American University in Cairo) studied archaeology at Leiden University (The Netherlands) and received his PhD in Vertebrate Palaeontology from Utrecht University (The Netherlands) in 2006. He has worked in Egypt since 1995 as a leather, footwear and cordage specialist for various missons (including Amarna, Berenike, Dra' Abu el-Naga, Elephantine, Hierakonpolis and Qasr Ibrim). Veldmeijer has also worked in several collections all over the world, studying ancient Egyptian and Nubian leatherwork and footwear as part of the Ancient Egyptian Leatherwork Project (AELP) and the Ancient Egyptian Footwear Project (AEFP) respectively. Among these collections are the Egyptian Museum in Cairo, the British Museum in London and the Metropolitan Museum of Art in New York. His second PhD, on the archaeology of footwear, is planned for the next four years. Veldmeijer is the director of two ongoing research projects: Ancient Egyptian Leatherwork Project (including the Egyptian Museum Chariot Project) and Ancient Egyptian Footwear Project. Veldmeijer is one of the founders and current chairman of the PalArch Foundation.