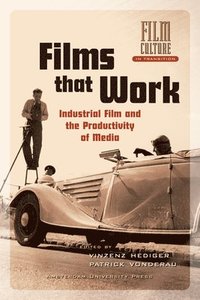 Industrial Film and the Productivity of Media

av Patrick Vonderau, Vinzenz Hediger
Häftad Engelska, 2008-08-01
399
Köp
Spara som favorit
Skickas inom 10-15 vardagar.
Fri frakt inom Sverige för privatpersoner.
Only available in hardback: "http://www.aup.nl/do.php?a=show_visitor_book&isbn=9789089640123">ISBN 978 90 8964 012 3 The history of industrial films - an orphan genre of twentieth-century cinema composed of government-produced and industrially sponsored movies that sought to achieve the goals of their sponsors, rather than the creative artists involved - seems to have left no trace in filmic cultural discourse. At its height the industrial film industry employed thousands, produced several trade journals and festival circuits, engaged with giants of twentieth-century industry like Shell and AT & T, and featured the talents of iconic actors and directors such as Buster Keaton, John Grierson and Alain Resnais. This is the first full-length book, anthology, and annotated bibliography to analyse the industrial film and its remarkable history. Exploring the potential of the industrial film to uncover renewed and unexplored areas of media studies, this remarkable volume brings together renowned scholars such as Rick Prelinger and Thomas Elsaesser in a discussion of the radical potential and new possibilities in considering the history of this unexplored corporate medium.
Visa hela texten

'Industrials' and 'educations', promotional and corporate films and videos, like amateur film, have in recent decades begun to receive attention, but barely a dozen books can be cited which seek to place these films in a broad context. FILMS THAT WORK offers, for the first time, a distinct theoretical framework in which to consider this archive of non-canonical non-fiction film.[-]More than that, it makes a rare contribution to bridging the chasm between English language and continental European film studies -- not just the Shell Film Unit but the Dutch side of its activities; not just sponsorship in the US but film as vocational training in France; not just film and Taylorism but also European uses of film to propagandise it. In short, this is one of the few books to give equal - if not additional -- weight to non-fiction film activity in continental Western Europe.[-]And FILMS THAT WORK achieves this in no dry and inaccessible manner. On the contrary, fascinating nuggets are to be found throughout: 150 copies of newsreels made pre-WW II by the Czech Bat'a shoe company and sent out to its 800 shops, Switzerland as corporate films' 'Hollywood', transvestite Krupps employees at a works-party filmed in 1936.[-]FILMS THAT WORK marks a step-change in the study of non-fiction cinema outside the documentary canon.[-][-]Professor Brian Winston[-]Lincoln Professor of Communications[-]University of Lincoln[-] - Industrial films have been around since the first decades of the Twentieth Century, but until recently they have largely been ignored in cinema scholarship. Films that Work is a masterful contribution to the growing literature in this area, and it does more than fill in the gap. Sensitive to both aesthetic practice and social context, its essays offer a comprehensive introduction to the sponsored film's international history. This brilliantly researched and engagingly written collection is a must-read for anyone interested in understanding the vital place of the moving image in industrial relations.[-][-]Anna McCarthy[-]Associate Professor and Associate Chair[-]Department of Cinema Studies, NYU[-]Coeditor, Social Text[-] - Films That Work represents the leading edge of a new era in media research. The history of nontheatrical films - productions that greatly outnumbered the commercial features we have long studied - is now being written in scholarly form. Hediger and Vonderau's anthology of new essays sets a high standard, demonstrating how significant this research can be and how much we have yet to learn about the thousands of such films awaiting rediscovery in archives and private collections.[-][-] -- Dan Streible, New York University

Patrick Vonderau is an assistant professor in the department of media studies at the same university.|Vinzenz Hediger is a professor of cinema studies at Goethe-Universit t Frankfurt where he directs the Graudate Research Training Program "Configurations of film". He is a founding member of the Permanent Seminar on Histories of Film Theories, a co-founder and former steering committee member of NECS - European Network of Cinema and Media Studies (www.necs.org) and a member of the Mainz Academy of Sciences and Literature. His publications include "Films That Work Harder. The Circulations of Industrial Film" (forthcoming from AUP) and "Nostalgia for the Coming Attraction. American Movie Trailers and the Culture of Film Consumption" (forthcoming from Columbia UP).