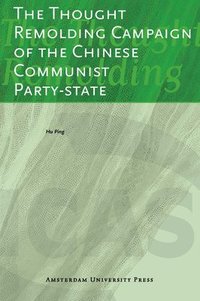 The Thought Remolding Campaign of the Chinese Communist Party-state

Why does a totalitarian regime make such extreme efforts to control not just its people's actions and words, but their private thoughts? Even more disturbing, why do so many people comply? One of the leading Chinese intellectuals living in exile, Hu Ping has wrestled with these questions for decades in his own life and through his engagements with fellow Chinese. In this important work previously available only in Chinese and French, he provides -- with a rare combination of psychological insight and philosophical rigor -- an astute analysis of unfreedom lived and freedom sought. He takes us on an empathetic and sometimes wry journey along the twisting pathways of compliance and resistance, ending with a clarion call to resist the overwhelming power of the state and continue the struggle for individual autonomy. -- Andrew J. Nathan, Professor of Political Science, Columbia University.[-][-] [-]"An incisive critique of the intellectual chicanery, psychological manipulation, and physical coercion that form the core of Chinese communism. In the tradition of Arthur Koestler, George Orwell, and Vaclav Havel, Hu Ping, a distinguished Chinese liberal, makes a significant contribution to the literature on totalitarianism." -- Professor Steven I. Levine, Visiting Scholar, Carolina Asia Center University of North Carolina at Chapel Hill[-][-] [-]"In the late 1970s Hu Ping's trenchant essay -On Free Speech, published in an unofficial student-run magazine, startled readers with its radical re-conception of the phrase -liberation of thought. Now, more than three decades later,/The Thought Remolding Campaign of the Chinese Communist Party-state/ provides us with Hu's mature and panoramic analysis of the relation between words and thought in both the totalitarian and post-totalitarian phases of China's recent history." -- Perry Link, prefssor emeritus, East Asian studies, at Princeton University[-][-] [-]"Hu weaves into his narrative a mixture of personal anecdote, references to Western philosophical work, social science research, and Chinese history. The breadth of references is striking." -- Charlotte Lee in Pacific Affairs[-][-]

Bloggat om The Thought Remolding Campaign of the Chi...