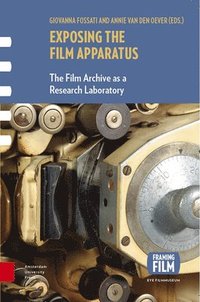 The Film Archive as a Research Laboratory

av Dr Giovanna Fossati, Pd Dr Annie Van Den Oever
Inbunden Engelska, 2016-03-01
1209
Köp
Spara som favorit
Specialorder (osäker tillgång). Skickas inom 11-20 vardagar.
Fri frakt inom Sverige för privatpersoner.
Film archives have long been dedicated to preserving movies, and they've been nimble in recent years in adapting to the changing formats and technologies through which cinema is now created and presented. This collection makes the case for a further step: the need to see media technologies themselves as objects of conservation, restoration, presentation, and research, in both film archives and film studies. Contributors with a wide range of expertise in the film and media world consider the practical and theoretical challenges posed by such conservation efforts and consider their potential to generate productive new possibilities in research and education in the field.
Visa hela texten

"[This] rich and extensive collection edited by Giovanna Fossati and Annie Van Den Oever represents a major book that significantly maps and expands perspectives and trajectories in the archaeology and history of technological media, and it represents a thought-provoking reflexion on the digital transition in the archival world." - Historical Journal of Film, Radio and Television, Andrea Mariani, Universita degli Studi di Udine, Italy. 'If dreams come true! The long desired collaboration between film archivists and film scholars has never been as fully realized as in this work, which is, itself, a genuine "research laboratory." Adopting an approach that constantly combines fundamental and applied research, the "materiality of the medium" is studied here in an entirely novel way. Starting with the digital turn, the essential problems of technique and technology have (finally!) returned to academic zeitgeist. Not surprising since the digital, which transformed our habits and customs as spectators and researchers, promotes a daily hands-on contact, producing a shockwave in the process. By "bridging archival and scholarly work on film apparatus" and recognizing the impact of the material turn (see the Introduction), Exposing the Film Apparatus will undoubtedly contribute to the upheaval of research methods and practices in cinema. ' -- Andre Gaudreault, Canada Research Chair in Cinema and Media Studies, Universite de Montreal. 'We are only a handful of decades into the adventure of moving images, yet already there are so many common misunderstandings about the contexts in which and for which they have been produced. This is in large part because we neglect the technologies of moving image production. This excellent collection fizzes with new approaches to understanding the apparatuses of cinema. These machines once gave life to images; now it must be our mission to give life back to these machines.' -- John Ellis, Professor of Media Arts, Royal Holloway University of London. "This eclectic series of essays avoids the danger of prescribing how we each experience but more likely use the moving image, whilst providing a matrix of approaches to thinking about how and why those experiences are the way they are. As such, they will engage graduate and post-graduate audiences." - Mike Leggett, Leonardo Reviews "The 29 contributions in Exposing the Film Apparatus are dedicated to detailed qualitative studies, which aim to explore rather than synthesise." - Fotografie und Film, original review in German "A collection [of essays] that emphasises the importance of preservation" - Boekman reviews, original review in Dutch

Giovanna Fossati is the chief curator of Eye Filmmuseum and professor of Film Heritage and Digital Film Culture at the University of Amsterdam. Annie van den Oever, Extraordinary Professor for Film and Visual Media, University of the Free State; University of Groningen. Series editor of The Key Debates.