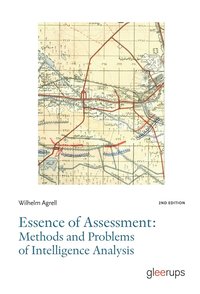 Essence of Assessment: ¿Methods and Problems of Intelligence Analysis E-bok

by Wilhelm Agrell with a foreword by Sir David Omand

"In some sense, I have written this book to summarize and clarify problems that I have been working on and researching in different ways since the beginning of the 1970s. However, the main aim, and my aspiration, is obviously for the book to contribute to an increasingly more essential awareness of and discussion on the opportunities and problems of analysis methods. The book is aimed at students and those interested with no previous experience or prior knowledge of intelligence as well as those on the analytical treadmill. New for the second edition is a chapter discussing successfully implemented methods. The book has also been updated with new examples and references to the latest research in the field."

Wilhelm Agrell has a twin academic background in history, and in peace and conflict research. Since 2006 he is the first Professor in Intelligence analysis in Sweden. He has written extensively on military R&D, security policy, regional conflicts and the role and transformation of intelligence. He is a member of the Royal Swedish Academy of War Sciences, and of the advisory board to the Swedish Security Service, and Visiting professor at the Center for Asymmetric Threat Studies at the National Defence College.

Sir David Omand is Visiting Professor at King"s College, London. He was the first UK Security and Intelligence Coordinator, responsible to the Prime Minister for the professional health of the intelligence community, national counter-terrorism strategy and "homeland security". Sir David served for seven years on the Joint Intelligence Committee. He was Permanent Secretary of the Home Office from 1997 to 2000, and before that Director of GCHQ.
Visa hela texten