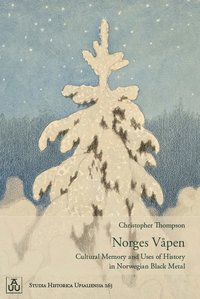 av Christopher Thompson
Häftad Engelska, 2019-01-15
249
Köp
Spara som favorit
Skickas inom 3-6 vardagar.
Fri frakt inom Sverige för privatpersoner.
Transgressive, anti-social, and dangerous, Norwegian black metal is a type of extreme metal music that pushes boundaries. Through the 1990s, this music scene was linked to a series of church burnings and murders that made Norwegian headlines. Whether through its strong anti-Christian rhetoric or its history with violence and vandalism, it is a menacing style of music that seems at odds with many of the stereotypes of Norway. However, like all kinds of popular music, it is influenced by its environment. As such, Norwegian black metal reflects something about what it means to be "Norwegian."

The dissertation explores the ways Norwegian black metal uses history and expresses cultural memory, thereby confirming themselves as Norwegian as well as contributing to the definition of Norwegian-ness. History use and other expressions of cultural memory are thus understood in the context of modern Norwegian identity construction and the ways these identities have persisted since the nineteenth century.
Visa hela texten