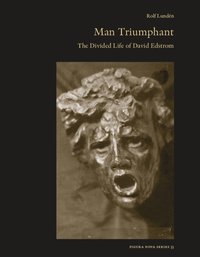 A hundred years ago regarded, together with Carl Milles, as the hope of Swedish sculpture, David Edstrom is today more or less forgotten. Man Triumphant - The Divided Life of David Edstrom tells the story of the young boy who grew up in Småland, Sweden, emigrated to Iowa, U.S.A., and hoboed his way back in 1894 to get his education at the Royal Academy of Fine Arts in Stockholm. After twenty-one years in Europe-in Stockholm, Florence, Paris, and Berlin-he returned to the United States and settled in Hollywood. As a person of two cultures he found himself betwixt and between, divided in his allegiance equally to his mother country and his adopted one.

A stubborn, uncompromising man, Edstrom managed to produce sculpture qualitatively well above what the average artist of the time could accomplish. He received acclaim from the best of the contemporary critics of Italy, Great Britain, Germany, the Netherlands, France, and Sweden. And yet, gradually he was disregarded and finally ousted from the canon of art. Over the years he came to know a number of the key figures of the period-Giovanni Papini (and some of the Italian Futurists-to-be), Gertrude Stein, who wrote two portraits of him, and her brother Leo, Henri Matisse, Frederik van Eeden, Crown Prince Gustaf Adolf and his wife Margaret, Ellen Key, Ernest Thiel, Harry Chandler, Robert A. Millikan, Gloria Swanson, and Charlie Chaplin of Los Angeles.
This book thus presents, from Edstrom"s point of view, the turbulent period of early modernism in Europe and the vibrancy of Southern California culture of the 1920s.