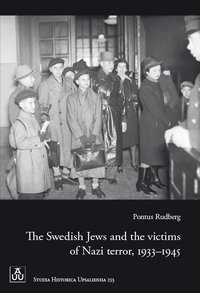 av Pontus Rudberg
Häftad Engelska, 2015-10-30
339
Köp
Spara som favorit
This dissertation aims to provide new knowledge about Jewish responses to the Nazi persecutions and the Holocaust. This has been done through a study of the actions of the Jewish minority in Sweden during the Nazi era. The study focuses on the Jewish Community of Stockholm (Mosaiska församlingen i Stockholm, or MFST) but also looks at other Jewish organizations as well as Jewish individuals in Sweden and their differing responses, here conceptualized as political actions (like protesting and lobbying), refugee assistance and relief.

This study seeks to contextualize the response of Swedish Jews through an evaluation of their room for maneuver and incitements to act. It has identified a number of factors that, to a varying degree, enhanced or limited Swedish Jews" ability to aid the victims of Nazi terror, including Swedish immigration legislation and refugee policy, the availability of information about the extent of Nazi atrocities, the relative effectiveness of Jewish organizations, and the financial resources available to the various Jewish relief committees.

The 'liberal imagination" of the Jewish elite, and a system of refugee aid based on traditional philanthropy also shaped the Swedish Jewish response - and neither was adequate to the scope and enormity of Nazi violence against the Jews. Nevertheless Swedish Jews engaged in a wide range of aid efforts. They raised a large amount of money for relief aid, and supported many refugees financially. They protested against German persecution, as well as Swedish and international indifference to the plight of the Jews. Swedish Jewish representatives repeatedly tried to influence the Swedish and US governments to adopt a more generous policy towards Jewish refugees. They negotiated with Swedish officials in order to raise the immigration quotas for Jewish refugees and introduce new categories of persons who might be eligible for entry.

At the time there were two major international networks of Jewish organizations, one mainly Liberal and one predominantly Zionist. This dissertation also shows that the MFST not only was influenced by both of these networks, but also that it took an active role in them. Although previously described as divided, the study shows that the Swedish Jews acted for the most part in concert and that there was broad support among them for the aid policies of the MFST.
Visa hela texten