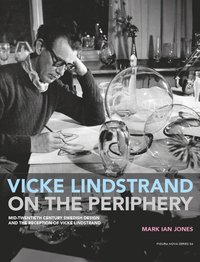 The richly illustrated text focusses on English language discourse on Swedish and Scandinavian Design during the 1950s and the reception and profile of Vicke Lindstrand. It reconstructs the context in which narratives and rhetoric emerged and analyses its effect on Lindstrand, between 1950-1970. Swedish and Scandinavian design are described in terms of a pared-down, clichéd aesthetic associated with 1950s 'Scandinavian Design", now held as a 'construct", continuously emphasising the same preeminent exemplars. Informed by extensive field study in Sweden, detailed archival research, informant interviews, object and text analysis, the book is divided into two parts.

Part I investigates the disproportional impact of a small actor-network associated with twentieth century English language discourse on Swedish and Scandinavian design. The author argues that this demonstrates the pervasive influence of the construction of a national ideal (Swedish design) that was loosely translated to fit a regional ideal (Scandinavian Design) by the formation of an exclusive filter that determined the fit of what was included in the promotion of a cohesive identity. This filter emphasised an ideology that shaped perceptions and has influenced the subsequent reception and visibility of individual designers. Not all designers were treated equally. Nationalist, regionalist and internationalist influences had an impact upon the critical reception of their work further complicated by past associations. The actor-network operated at the level of selective solidarity, which was exclusive rather than inclusive. Part II examines the consequences of this fit through an analysis of the position and reception of Lindstrand.

Preeminent exemplars, familial influences and the agency of an actor-network were profoundly influential in shaping perceptions and determining taste in 1950s Sweden, presenting a filtered view of design from the region. Lindstrand was strongly affected by the activities of this network. An interesting outcome of this study was the realisation that our understanding of Swedish design is incomplete, and that there is another more pluralist aesthetic concealed behind that officially promoted and exhibited during the 1950s. This investigation brings unique and unprecedented readings of a peripheral individual in the context of English language representation, and of the Scandinavian milieu.
Visa hela texten