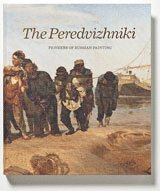 av David Jackson, Per Hedström
Inbunden Engelska, 2011-09-19
349
Köp
Spara som favorit
Skickas inom 3-6 vardagar.
Fri frakt inom Sverige för privatpersoner.
The society of Russian artists known as the Peredvizhniki was formed in the late nineteenth century against a background of Academic autocracy, state censorship and political and social unrest. Through their art the Peredvizhniki addressed contemporary indigenous issues such as the hard lives of the rural and urban peasantry, the fate of political activists, landscapes, and portraits of the nation's intellectual elite. But its members also portrayed Russian history, myth and legend, promoting a passionate sense of national pride as they sought to widen the social audience of art by touring their brand of accessible realism to the provinces. The art of the Peredvizhniki has been tremendously popular in Russia since its foundation but is still little known to the public in the West. This book and accompanying exhibition presents the art of the Peredvizhniki on the largest and most comprehensive scale ever seen outside of Russia.
Visa hela texten