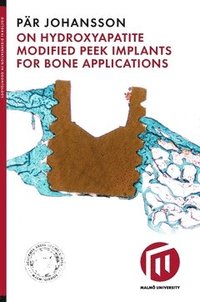 av Pär Johansson
Häftad Engelska, 2018-01-30
259
Köp
Spara som favorit
People are living longer today than ever before, and the number of older adults will increase exponentially over the next coming years. However, that does not necessarily mean that they are living healthier. An aging population presents many opportunities but also challenges in the public health care with a sharp increase in incidence of many diseases associated to the bone, teeth and joint systems. Orthopedic and dental implants commonly used mostly consist of metals, composites, polymers and ceramics. Titanium has been widely used in the orthopedic and dental field to replace or support mineralized structures. Titanium possesses good mechanical, physical and biologic properties. However, titanium has in the clinic presented some critical drawbacks. The modulus of elasticity is higher than that of bone which may cause stress shielding and bone resorption ultimately jeopardizing the implant retention. In addition, with rare cases of titanium allergy and patient desires for non-metallic treatments, alternatives to titanium are being studied. Furthermore, the radiopacity of titanium causes interference with the radiographic evaluation and the non-esthetic color may discolor the gingiva of thin biotypes. Recently, advanced polymeric implantable materials have been introduced into the medical field. Polyetherether ketone (PEEK) is widely used in various orthopedic applications, such as spine implants, joint replacements and fracture fixations. In dentistry, PEEK can be manufactured as prosthetic components, fixed and removable bridges and dentures. PEEK is a thermoplastic polymer with mechanical properties that are close to those of human bone, for example the elastic modulus. This will minimize the stress shielding upon loading and stress distribution. Besides, PEEK holds excellent biocompatibility with no toxic or mutagenic effects in vitro and in vivo. However, unmodified PEEK is biologically inert with limited pro-tein and cell adhesion to the surface. Therefore, improving the bio-activity of PEEK is a significant challenge and a prerequisite to possess all of its potentials as a biomaterial. There are currently 2 methods to improve the bioactivity of PEEK; surface modification and composite preparation. Hydroxyapatite (HA) is the most widely used material due to its biocompatibility and osteoconductive potential in association with biomaterials. There are many developed and evaluated methods to deposit HA on metallic implants, but the only commercially used one is plasma spraying. However, the technique has some severe disadvantages such as irregular coating thickness with deficient adherence to the implant surface. Clinical complications have been confirmed with inflammation caused by fragments of delaminated coating. To challenge these disadvantages, several alternative coating techniques have been introduced. The aim of this thesis was to evaluate a novel surface modification of bioactive hydroxyapatite deposited by a spincoating technique. The technique generates a crystalline, nanosized coating homogenously distributed over the implant surface. In particular, the thesis encompasses a comprehensive topographic analysis to evaluate the coating properties. In addition, the HAPEEK implant will be compared in vivo with an unmodified control with respect to its oste-oconductive and bioactive properties. In study I, the surface topography was characterized using interferometry (IFM), scanning electron microscopy (SEM) and atomic force microscopy (AFM) of the same types of implants that were evaluated in the experimental animal models. The chemical characterization before and after the coating procedure was evaluated with X-ray photon spectroscopy (XPS). Mechanical testing of implants were completed in accordance with the tensile testing standard (ISO 527-2). Furthermore, the hydrophilic appearance after coating was estimated by measuring the contact angle. The results from the ma-terial characterization reveal a hydrophilic coa
Visa hela texten