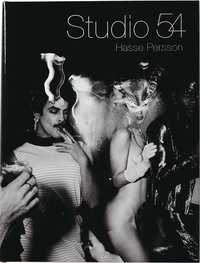 Studio 54 was the world"s most famous and exalted discothèque. It opened in 1977 at 254 West 54th Street in New York City at a time when disco music was enjoying its frenetic peak. The establishment attracted the celebrities of the day and a carefully filtered mix of guests spreading their stardom. On the Studio 54 dance floor, everyone was a star.

Hasse Persson spent hundreds of nights at Studio 54 between 1977 and 1980. His pictures have become legendary. Now, they are published in book form for the first time.

Studio 54 can be seen as a return visit to an ultra permissive epoch and a social phenomenon. Interest

Hasse Persson (b. 1942), has enjoyed a lengthy career as a photo-journalist, principally in the United States. When based in New York for almost a quarter of a century (1967-1990), he covered the world. He has published five books on American themes and his photographs have appeared in newspapers and magazines like The New York Times, Time, Newsweek, Paris-Match and Life as well as the Scandinavian press.