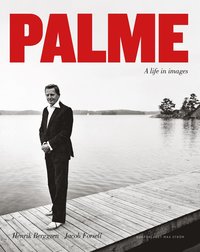 Palme : a life in images

av Henrik Berggren, Jacob Forsell
Inbunden Svenska, 2016-06-02
329
Köp
Spara som favorit
Finns i lager! Skickas inom 1-3 vardagar.
Fri frakt inom Sverige för privatpersoner.
This is the first comprehensive photographic biography on the life of former Swedish prime minister Olof Palme. One of Sweden"s most influential politicians - loved by many, hated by others - Olof Palme affected everyone. He made an indelible impact on Swedish contemporary history. He was also one of Sweden"s most photographed individuals: the authors worked through hundreds of thousands of images while researching this book, which features more than 200 unique photographs, many of which have never been published previously.

The result is an epic journey from Palme"s birth in 1927 through his childhood in the 30s, his studies during the war years, and his intensive travel in the 50s. In 1954 he was made personal assistant to then Swedish prime minister Tage Erlander, giving Sweden new leadership. During the 1960s, the country"s youngest minister constantly made headlines, and in 1969 he was appointed chairman of the Social Democratic Party, making him prime minister of Sweden. During the torrid 1970s, with the Norrmalmstorg hostage crisis, (which gave birth to the phrase 'Stockholm Syndrome"), the terror attack on the West German embassy, kidnapping threats and electoral defeat, Palme was constantly at the centre of public life. When he returned to power in 1982, he was more influential than ever - although he knew that the country he led had changed. Less than four years later, he was murdered.

Text contained in the book, written by the award-winning author Henrik Berggren, provide a detailed summary of a life in pictures.