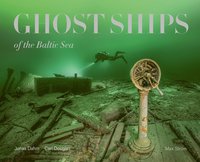 av Carl Douglas, Jonas Dahm
(1 röst)
Inbunden Engelska, 2020-11-30
3195
Köp
Spara som favorit
This is the largest photo book of shipwrecks in the Baltic sea ever published. It is the collector"s edition of this acclaimed book that takes you down to the most spectacular wrecks in the Baltic Sea. The format 48 x 35 centimeters and the weight is almost five kilos. It is printed in a limited edition of 459 individually numbered copies, each signed by the authors.

On board these sunken ships, time has frozen - it often feels as if the crew has only just left the vessel. The wrecks have become like time capsules, a spooky mixture of serene beauty and haunting reminders of a brutal drama.

These amazing images of the ghost ships of the Baltic have attracted global attention and appear in this book reproduced really large for the first time.
Visa hela texten