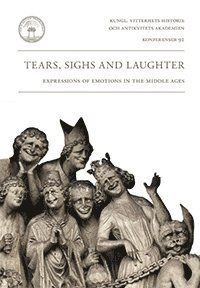 Tears, sighs and laughter : expressions of emotions in the Middle Ages

av Per Förnegård, Erika Kihlman, Mia Åkestam, Gunnel Engwall
Häftad Engelska, 2017-01-26
279
Köp
Spara som favorit
Skickas inom 3-6 vardagar.
Fri frakt inom Sverige för privatpersoner.
In the 1990s a new interest for research on emotions and affectivity in the humanities and the social sciences began to develop. This movement, later referred to as "the affective turn", has been a most productive and vigorous field of research in the past decades as it opens up for new interpretations of historical source materials and enables studies of the relationship between states of mind and materiality. In addition, it prompts questions of, for example, gender, power and religiosity, thus being conducive to a fuller understanding of historical events, places and persons.

This anthology is the result of a Marcus Wallenberg symposium held at The Royal Swedish Academy of Letters, History and Antiquities, focused on interpretations of emotions as expressed in medieval art and literature. The contributing scholars represent a wide variety of disciplines as can be seen in the range of topics and materials in the articles. Emotional expressions within the religious as well as the secular spheres are analyzed, drawing on hagiographical and biblical texts, monastic writings and sermons, early modern novels and comic tales, crusader stories, historical chronicles and even runes.