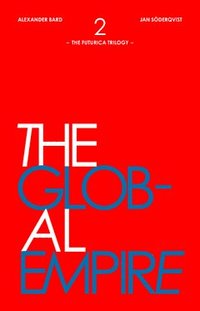 av Jan Söderqvist, Alexander Bard
(1 röst)
Häftad Svenska, 2011-03-14
211
Köp
Spara som favorit
Skickas inom 7-10 vardagar.
Gratis frakt inom Sverige över 159 kr för privatpersoner.
The Futurica Trilogy:
In the late 1990"s, Swedish social theorists Alexander Bard and Jan Söderqvist started working on a radical new theory called The Netocracy Hypothesis. Mr Bard held a renowned series of lectures at the Stockholm School of Economics, Mr Söderqvist wrote a number of extensive magazine articles. They claimed that the interactive revolution is the most profound and radical of all revolutions in history, that it completely transforms society, power structures, worldviews and the idea of what it means to be human, and does so on a massive and thoroughly global scale. Bard & Söderqvist foresaw the control of the internet as the main power struggle for the next century; an outright war between a brand new rising elite (the netocracy) and an established but falling elite (the bourgeioise). Bard & Söderqvist not only prophetized against the tide at the millennium (and cleverly foresaw both the dot com crash and September 11), they have since then been proven right in every aspect and even at the most minute of detals. Not only did Bard & Söderqvist foresee revolutionary innovations such as Google, Facebook, Al-Qaida and Wikileaks, they also went deeper and looked beyond where any other observer has been or managed to go, into the very power struggle of the on-going revolution. For the first time, all three of Bard & Söderqvist"s best-selling literary works have been bundled together and released as one compact set, under the title The Futurica Trilogy. The first book is The Netocrats (how the internet creates a new global upper class which fights and destroys the old stuggling power structure); the second book is The Global Empire (the worldview of the netocrats and how it radically differs from any previous ideology in history); and the third book is The Body Machines (how the idea of what it means to be human in an interactive world radically differs from any previous concept of human existence). Do as thousands around the world have done before you, read Bard & Söderqvist, practice what they preach, and become a netocrat yourself!
Visa hela texten