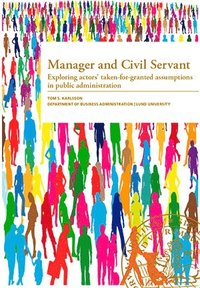 av Tom Karlsson
Inbunden Engelska, 2014-05-27
419
Köp
Spara som favorit
During more than 30 years, the public sector has been subjected to
increased forms of economification. A general trend of imposing management
techniques within public administration has shifted previous
understandings of how organising and control should be undertaken.
Instances of efficiency and economy have become important, overshadowing
instances of effectiveness and equity. As these instances
play out within public administration dilemmas emerge, which actors
need to make sense of.
In this dissertation, an exploration of actors" taken-for-granted assumptions
within the Swedish central government is undertaken. More
specifically, actors engaged in public administration within the Swedish
Social Insurance Agency (Försäkringskassan) make out the central
empirical focus. This dissertation contains open-ended interviews, selfadministered
surveys, as well as the use of focus groups as methods for
continuous exploration.
Taking a theoretical stance within institutional theory, the concept
of taken-for-granted assumptions is elaborated and explored in order
to challenge prior knowledge of actors" understandings and behavioural
alignment. It is argued that such taken-for-granted assumptions
align with social systems, dominating certain contexts. Within public
administration, these social systems are understood as Management
and Civil Service.
It is concluded that dilemmas inherent in public administration are
made sense of in two manners. Firstly on the basis of rejecting the
premises for dilemma and secondly by compartmentalising internal
and external perspectives. The separation of Management from Civil
Service enables actors engaged in public administration to understand
beliefs and practices within contemporary public administration.
Visa hela texten