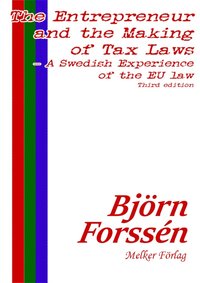 The Entrepreneur and the Making of Tax Laws ? A Swedish Experience of the EU law: Third edition E-bok

In this third edition there"s an annex added, concerning Part D. Thereby you have an example of empirical studies of law and language issues concerning the process of The Making of Tax Laws, namely regarding whether that process is functioning with respect of making Swedish national VAT rules that correspond with the rules of the VAT Directive (2006/112/EC). This study, presented in the book as Annex No. 1 to Part D, is a reproduction of the book Law and language: Words and context in Swedish and EU tax laws, published in April 2017, which in its turn is the summary and concluding viewpoints from Ord och kontext i EU-skatterätten: En analys av svensk moms i ett law and language-perspektiv - published in 2016.

- Part A concerns systematic issues on The Making of Tax Laws from the perspective of the entrepreneur and how the legislator"s intentions of taxation are conveyed by the texts;

- Part B concerns how communication distortions may occur thereby, mainly due to poor texts being made by the legislator; and

- Part C is about consequences thereof for the entrepreneur, mainly concerning charges of tax surcharge and tax fraud. An Epilogue ties together parts A-C.

- Part E is about planned empirical studies of the use of tax revenues, which might lead to studies - with regard of Part D - about methods for discovering communication distortions in the process of The Making of Tax Laws.

Mr. Björn Forssén is a Swedish Doctor of Laws.