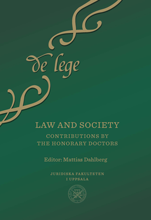 Law and society : Contributions by the Honorary Doctors

av Mattias Dahlberg
Inbunden Norska, 2019-08-12
569
Köp
Spara som favorit
Skickas inom 2-5 vardagar.
Gratis frakt inom Sverige över 159 kr för privatpersoner.
This volume of De lege includes articles and speeches by many of the recent honorary doctors within the Faculty of Law, Uppsala University. The contributions cover a wide range of different topics. Included are several of the speeches given by the new honorary doctors to members of the Uppsala faculty the day before the Conferment ceremony. With a few exceptions, none of the contributions have previously been published, and if so, in a limited form. All of the contributing authors have a longstanding relationship with the Uppsala Law Faculty and take part in the different educational and research activities at Uppsala University.