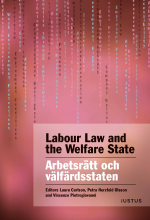 av Laura Carlson, Petra Herzfeld Olsson, Vincenzo Pietrogiovanni
Häftad Engelska, 2019-09-10
393
Köp
Spara som favorit
This anthology comprises articles written by Swedish labour law researchers representing every university in Sweden. Its theme, labour law and the welfare state, is topical as the current promotion of markets, national, regional and international, arguably cannot legitimately take place without at the same time safeguarding labour and other social rights. One of the most salient characteristics of Scandinavian welfare states can be seen as the fusion of welfare and
employment. Swedish trade unions, alone or together with the employer organisations, often have stepped in and adopted measures to complement state
-based social security systems. The articles in this anthology address different aspects of the relationship between the Swedish labour law model and the welfare state.