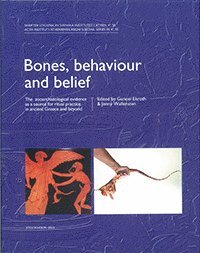 av Gunnel Ekroth, Jenny Wallensten
Inbunden Engelska, 2013-01-01
559
Köp
Spara som favorit
Kan levereras innan julafton!
The importance of the zooarchaeological evidence as a source for ritual practices in ancient Greece is gradually becoming widely recognized. Animal bones form the only category of evidence for Greek cult which is constantly significantly increasing, and they can complement and elucidate the information provided by texts, inscriptions and images. This volume brings together sixteen contributions exploring ritual practices and animal bones from different chronological and geographical perspectives, foremost ancient Greece in the historical period, but also in the Bronze Age and as early as the Neolithic period, as well as Anatolia, France and Scandinavia, providing new empirical evidence from a number of major sanctuaries and cult-places. On a methodological level, the complexity of identifying ritual activity from the zooarchaeological evidence is a recurrent theme, as is the prominence of local variation visible in the bone material, suggesting that the written sources and iconography may offer simplified or idealized versions of the rituals actually performed. Although zooarchaeology needs to and should be integrated with other kinds of sources, the independent study of the bones in an unbiased manner is of utmost importance, as the bones can provide a different "reality" than that encountered in our other sources.
Visa hela texten