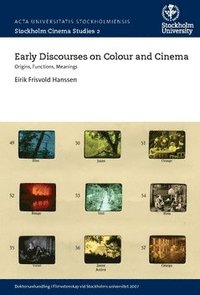 av Eirik Frisvold Hanssen
Häftad Engelska, 2016-12-05
89
Köp
Spara som favorit
This dissertation is a historical and theoretical study of a number of discourses examining colour and cinema during the period 1909 to 1935 (trade press, film reviews, publications on film technology, manuals, catalogues and theoretical texts from the era). In this study, colour in cinema is considered as producing a number of aesthetic and representational questions which are contextualised historically; problems and qualities specifically associated with colour film are examine d in terms of an inter- relationship between historical, technical, industrial, and stylistic factors, as well as specific contemporary conceptions of cinema. The first chapter examines nations concerning the technical, material, as well as perceptual, origins of colour in cinema, and questions concerning indexicality, iconicity, and colour reproduction, through focusing on the relationship between the photographic colour process Kinemacolor, as well as other similar processes, and the established non-photographic colour methods during the early 1910s, with an in-depth analysis of the Catalogue of Kinemacolor Film Subjects, published in 1912. The second chapter examine s nations concerning the stylistic, formal and narrative functions of colour in 'cinema, featuring a survey of the recurring comparisons between colour and sound, found in the writing of film history, in discourses concerning early Technicolor sound films, film technology, experimental films and experiments on synaesthesia during the 1920s, as well as Eisenstein's nations of the functions of colour in sound film montage. The third chapter examines the question of colour and meaning in cinema through considering the relationship between colours and objects in colour film images (polychrome and monochrome, photographic and non-photographic) during the time frame of this study.
Visa hela texten