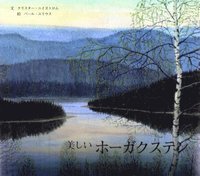 av Christer Nyström
Inbunden Japanska, 1997-12-01
179
Köp
Spara som favorit
Christer Nyström was born in 1943 in Örnsköldsvik where he grew up. He has been in legal practice in Sundsvall since 1974. He has written standard works in the art prints of the Swedish artists Sven X-et Erixson and Einar Norelius and has published "Medmänniskor i Norr" the final work by the Saami scholar Ernst Manker.

In his latest book "Beautiful Sweden: The High Coast" he introduces the reader to contemporary life, pointing out vantage points, fishing hamlets and much else of interest on the coast of Ångermanland, presenting fascinating historical details from this long inhabited region.

Christer Nyström's initiated portrait of the High Coast will surely become a classic. Per Julius was born in 1951 in Örnsköldsvik. He has lived in the French town of Annecy since 1986.

While the naked branches of the birch trees stand out against the pink sky of evening, the trunks form a decorative foreground to the wide panorama of the landscape with blue peaks in the distant horizon. This is the landscape, nature's extraordinary architecture, that Per Julius has depicted with such detail before it is hidden by summer foliage.

Per Julius works mostly with watercolours, a perfect medium for his exact and highly detailed pictures. His sensitive landscape paintings beginning in the late 1970s, developed out of the expressive and naive oil paintings of his youth. He gave up oils in favour of watercolour paintings some years later.

Winter, spring and autumn are his seasons. At dawn and dusk he sets out with his sketchbook and his paints, searching for new motifs. But the paintings themselves are created in his barn in Örnsköldsvik or in Annecy where he has lived since 1986. He often becomes so involved with his paintings that he is reluctant to part from them when they are finished.

Per Julius is one of Sweden's foremost painters with a unique gift for portraying the lovely Swedish countryside from the High Coast to the Tärna mountain.
Louise Lyberg
Senior Curator, Bukowskis
Visa hela texten