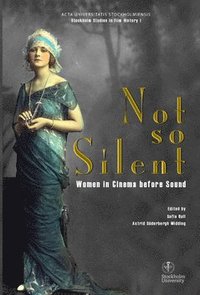 Not so silent : women in cinema before sound

av Sofia Bull, Astrid Söderbergh Widding
Häftad Engelska, 2015-09-02
120
Köp
Spara som favorit
Skickas inom 7-10 vardagar.
Fri frakt inom Sverige över 159 kr för privatpersoner.
"The work of the Women and the Silent Screen Conferences [...] is to collectively create a new realm of cinema history, neither 'the' history, nor 'a' history, but a strange double world." These words are from Jane Gaines in her keynote address for the fifth Women and the Silent Screen Conference, held at the Stockholm University in 2008. This proceedings volume gives a representative picture of the breadth of the conference. The rich and varied contributions address theoretical issues around this double world of "cinematification" and feminist historiography, advancing questions on the authorship of pioneering female filmmakers and the role of female stars in early cinema. Other topics explored include transnationalism, the performance of femininity, fandom and fashioning, and branding within the studio system. The diversity of subjects in this volume reveals both the complexity and the problems of the field of research that the Women and the Silent Screen Conferences represent. Not only do these papers deal with well-known, concrete issues within feminist scholarship, but they also consider a more fundamental question: that of the medium as such in its early years, and its conceptualisation within a feminist scholarly framework.
Visa hela texten

Bloggat om Not so silent : women in cinema before sound